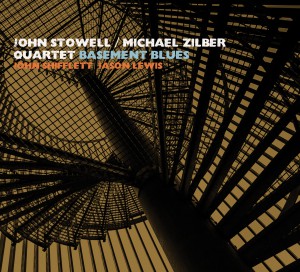 Both musicians have ample space to demonstrate their harmonic agility and melodic finesse, and yet the arrangements, instead of sounding episodic and repetitive, flow, swirl and dance.
JazzTimes

After a decade of collaboration, master guitarist John Stowell and the towering Bay­-Area saxophonist, Michael Zilber, along with the dynamic bass/drum duo of John Shifflet and Jason Lewis, have developed a sound widely hailed as conversational, empathetic, and richly intuitive. For their third Origin release, they offer another set of melodic and engaging modern jazz compositions, drawing equally from modern swing, post-bop and their deep life experiences. "...an intimate quartet affair, marked by the kind of soulful, instinctual interplay that fans have come to expect." ­ JazzTimes.

Midwest Record (Chris Spector)
With a sound reminiscent of how it was with Oregon when they were transitioning from Elektra to ECM, this crew has the modern sweet spot well in hand where many things merge into a sound at once familiar but thoroughly it's own. A real treat for those that still remember how it was when you could make music in the marketplace that wasn't required ...

All About Jazz (Dan McClenaghan)
Basement Blues is the third Origin Records CD offering from the John Stowell/Michael Zilber Quartet, following Shot Through With Beauty (2009) and Live Beauty, (2013). Guitarist Stowell's approach is distinctive - silvery chords and pinprick single notes that reverberate from the rafters. Saxophonist Zilber is a flawless, soulful technician on sop ...

Cadence (Robert Rusch)
I remember JOHN STOWELL [g] from the mid '70s when he made a series of rather ethereal recordings. Over the years he seems to have tempered that sound. His latest pairs him up once more with his long time associate, MICHAEL ZILBER [sax/p]. BASEMENT BLUES [Origin 82717] is with the quartet [John Shifflett­b, Jason Lewis­ drm] recorded 3/12 and 3/1 ...

Jazz Weekly (George W. Harris)
Here's a soothingly swinging album by a quartet lead by saxist Michael Zilber and guitarist John Stowell. Together with John Shifflett/b and Jason/dr they mix a pair of covers with their own well crafted and wide ranging originals. Zilber's tenor is rich and full on the kinetic read of Bill Evans' "Very Early" while he gets warm and bluesy on t ...

JazzTimes (Mike Joyce)
Following this West Coast ensemble's two widely acclaimed recordings, Shot Through With Beauty and Live Beauty, Basement Blues may seem like a departure, in tone and tack. But as "Stowell in Heart" and other highlights here warmly illustrate, Basement Blues is similarly riddled with charms, to say nothing of its soulful allure and conversational ...