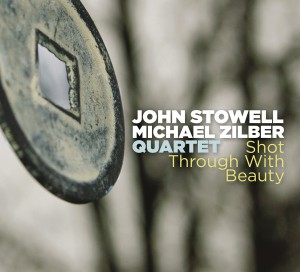 ...Stowell seems to pull arching motifs out of thin air, eschewing cliches while maintaining a swinging essence.
All About Jazz

Master musicians guitarist John Stowell and saxophonist Michael Zilber team with the Bay Area's first-call rhythm team of bassist John Shifflet and drummer Jason Lewis, crafting a unique and dynamic recording of modern jazz that transcends the whole. Telepathic exchanges are in abundance as the group tackles a compelling mix of originals and compositions from Kenny Wheeler & John Scofield.

"Zilber is one of the best players and composers anywhere: Period!" - NEA Master David Liebman

Reviews of Shot Through With Beauty

The Jazz Word (John Barron)
Like minds converge on Shot Through With Beauty, a quartet release co-led by guitarist John Stowell and saxophonist Michael Zilber, two stalwarts of West Coast progressive jazz. Joined by bassist John Shifflett and drummer Jason Lewis, who each contribute a composition to the session, the group achieves collaborative serenity through ten tracks of ...

Jazz Society of Oregon (Kyle O'Brien)
Stowell is one of Portland's most refined jazz guitarists. He is versatile and sophisticated, along with being highly inventive. But instead of being brash like many bold improvisers, his persona is controlled and tempered. Here, with like-minded saxophonist Michael Zilber, bassist John Shifflett and drummer Jason Lewis, Stowell is well within his ...

Cadence (Michael Steinman)
It's a compliment to 'Shot Through with Beauty' that the music the quartet makes seems deeper (not louder) than what you'd expect from four players. Yet it's not assertive thrashing, but exploratory music, often probing. And the quartet is capable of both great assertiveness (on the first track) and serenity (on "Con Alma")--and combinations ( on ...

JazzTimes (Mike Joyce)
Fans of John Scofield's '90s recordings should find much to enjoy on 'Shot Through With Beauty,' and not merely because the album features a new quartet led by guitarist John Stowell and saxophonist Michael Zilber personalizing two sharply contrasting Scofield compositions, "Wahasb III" and "The Beatles." The former tune boasts an arrangement with ...

Western Australian Guitar Player Society (DS)
A welcome quartet recording. Jon is so effective as the harmony player and has an approach very different to most other guitarists. Saxophonist Zilber comments on John's virtues..."depth, beauty, complexity, lyricism and masterful originality." Great quartet, the bass and drums a real stand out. "Kayak" is a great Kenny Wheeler tune with medium ...