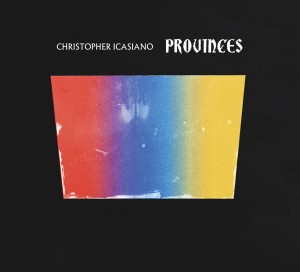 Icasiano's drumming harnesses shocking power and does strange things to your perception of time and space.
Dave Segal, The Stranger

Filipino-American percussionist and composer Christopher Icasiano presents his debut solo work Provinces, two suites that explore the complexity of cultural identity and community as a second generation immigrant in Seattle. Composed predominantly on the drum set, Provinces' virtuosic rhythmic patterns evoke melodies over long cyclical phrases, while a lush color palette provided by keyboards and percussion fill out the soundscape. Added field recordings taken from Icasiano's first ancestral trip to the Philippines are blended in, transporting the listener to a world that is foreign yet familiar. Christopher's lifelong study of jazz, his love of 90's R&B and folk music, and his 12-year collaboration in the experimental drum and saxophone duo Bad Luck make Provinces a unique intersection of the avant-garde and the mainstream - always compelling, always challenging.

The Stranger (Dave Segal)
Chris Icasiano has established himself as one of the boldest musicians in Seattle's jazz and experimental-music scenes as a drummer in the Bad Luck duo with saxophonist Neil Welch. Together they've delved into free-jazz maelstroms and more nuanced and somber pieces with masterly skill. Icasiano's debut solo album, Provinces (out today), consists ...

KFJC 89.7FM (Max Level)
Drums and keyboards–everything played by Icasiano, a mainstay of the Seattle free music scene. There are two "suites" here and within each suite the pieces tend to track together. Several of the tracks have repeating–in some cases one could say relentless–drum patterns, augmented with simple keyboard/synth melodies, drones, and sounds. Field ...

The Answer Is In the Beat (Paul Simpson)
The first solo album from Christopher Icasiano (of Seattle-based jazz group Bad Luck) contains two continuous suites ("Provinces" and "Taho") related to the complexity of cultural identity as a second generation Filipino-American. The album consists entirely of complex, sometimes frenzied drumming mixed with ambient synths as well as some field rec ...

ABS-CBN (Rick Olivares)
"Meet Chris Icasiano, the Fil-Am drummer of indie pop band Pure Bathing Culture" MANILA -- Filipino-American indie rock legends Versus, out of New York City, have created a buzz with the release of a new extended play album and full length album -- "Ex Nihilo" and "Ex Voto," respectively -- over the past few months after keeping quiet for almost ...

Jazz Halo (Belgium) (Georges Tonla Briquet)
The American label Origin is mainly specialized in jazz based on tradition. With 'Provinces' they radically deviate from that course. You could say a kind of "close encounters of the unknown kind". The man who is responsible for this alone: ​​multi-instrumentalist Christopher Icasiano. The continuously drumming drums create an uncomfortable ...

Earshot Jazz (Bryan Lineberry)
Chris Icasiano is a Seattle-based Filipino-American percussionist and composer of great presence in Seattle. One might know him as drummer of the iconic Bad Luck, as a social activist, music organizer and advocate, and/or around Café Racer for Racer Sessions. Icasiano can find meaning and influence in just about any genre of music, and for his ...

Roots Music Report (Robert Silverstein)
**** 4-stars Washington State based Origin Records steps out of their comfort zone with the 2020 release of Provinces from composer and multi-instrumentalist Christopher Icasiano. Very unusual sounding yet rewarding as a musical experience, the eight part CD is a fine showcase for Christopher's drumming, percussion and keyboard skills. Sounding ...

Earshot Jazz (Bryan Lineberry)
Chris Icasiano is a Seattle-based Filipino-American percussionist and composer of great presence in Seattle. One might know him as drummer of the iconic Bad Luck, as a social activist, music organizer and advocate, and/or around Café Racer for Racer Sessions. Icasiano can find meaning and influence in just about any genre of music, and for his ...

Free Jazz Blog (Gregg Daniel Miller)
4 1/2 STARS I had to listen to this record for months before I could write about it. It's that different. Percussion solo records are an interesting breed, and this one doesn't remind me of anything. Icasiano's percussiveness is all about the pacing and grouping of the beats. Clusters, clusters, driving and then receding, with crisscross patter ...