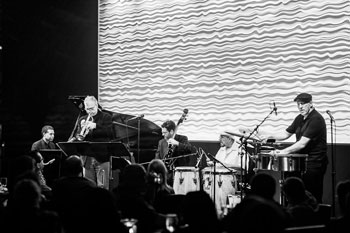 Lary Barilleau is an exciting percussionist and talented composer with over 35 years experience performing in jazz, latin jazz, salsa and contemporary music. A veteran of all the northwest's major festivals and clubs, Lary has worked and recorded with many great musicians and groups including Pete Escovedo, Joe Santiago, Cedar Walton, Doug Beavers, Julian Prestier, Jay Thomas, Mimi Fox, Marc Seales, Sonando and The Seattle Repertory Jazz Orchestra among others. Lary performed several concerts with legendary jazz vocalist Mark Murphy, and along with Seales, the New Stories Trio and Roger Treece, appeared on Murphy's recording Song For The Geese, which was nominated for a Grammy Award in 1998. For over 20 years, Lary was the percussionist in the Marc Seales Group and was featured on The Paris Suite with Northwest favorites Thomas Marriott, Evan Flory Barnes and DeVonne Lewis. Lary is also an accomplished composer and many of his originals are featured on his group's CD - Carmen's Mambo. The Latin Jazz Collective features original music including classic latin jazz and salsa.