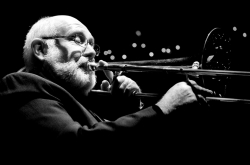 Born into a musical family, Stan began his professional musical career at the age of 15, playing "tailgate" trombone in his father's Dixieland band. In college he studied music at Fort Hays State (Kansas), receiving his B.M.E., and then his M.M.in solo performance from the University of Northern Iowa. Stan then entered the U.S. Air Force Band program where he served as trombone soloist and lead player with various groups for over 19 years. During his Air Force career, Stan performed on radio, television, and on recordings throughout the United States and Europe. Stan arrived on the Portland, Oregon scene in the mid '90s and has become one of the most active jazz trombonists in the area, performing with a full spectrum of musical groups throughoutthe United States.

Stan has released 2 solo CDs, Of Fathers and Sons and, in December, 2002, Night Grooves.

Stan currently lives in Vancouver, WA and is on the music faculty at Willamette University where he teaches low brass, and coaches brass ensembles and jazz combos. In the Fall term of '05, Stan joined the jazz faculty at Mt. Hood Community College where he directs Jazz Band II and Jazz Combos. Stan Bock is an endorsing artist for C.G. Conn, Inc. and he appears throughout the Northwest as a Clinician and adjudicator.