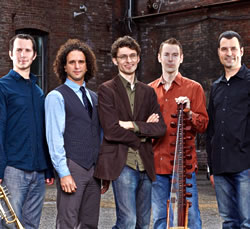 mesmerizing...it's as novel and agreeable a sound as you've never heard
- Seattle Times

Pianist, composer, and bandleader Andrew Oliver is a rising young musician on the Northwest jazz scene, directing a number of diverse groups in Portland and Seattle. After growing up in Portland, he relocated to New Orleans to study jazz, but was flooded out by Hurricane Katrina in 2005 and returned home. He began playing with New Orleans native saxophonist Devin Phillips and long-time New Orleans drummer Mark DiFlorio, who had also relocated to Portland after the storm. In 2007 Devin's quartet featuring Andrew and Mark was one of ten groups selected from a pool of 200 bands to particpate in the U.S. State Department's Rhythm Road: American Music Abroad program. They toured five West African countries performing, teaching workshops, and working with local musicians as cultural ambassadors of the U.S.

After this unique experience, Andrew was inspired to dive deeper into the relationship between jazz and West African music. His exploration eventually led to the founding of the Kora Band, featuring atypical instrumentation that highlights Kane Mathis on the 21-string Kora, a traditional harp from West Africa. Kane is one of the most accomplished American Kora players, having studied with the famous Jobarteh (Diabate) family in Gambia, in the same compound that produced three generations of the country's most famous musicians. This study resulted in diplomas and certificates of recognition from Malamini Jobarteh, The Gambian minister of culture, and the President of the Gambia.

In 2009 the ensemble released their debut album "Just 4 U", which Portland's Willamette Week called "a gorgeous, moving record" and which the Seattle Weekly said was "one of the better world-music releases to come out of the Northwest all year." They have released their second album, "Cascades," on OA2 in September of 2010. On "Cascades," the group covers a wide range of traditional Mandinka pieces from across West Africa, modern repertoire from Congo and Cameroon, and new originals by Oliver and Mathis, providing uplifting and unique music that reflects the increasing globalization of today's world.

For more information about The Kora Band, please visit: http://www.koraband.com.