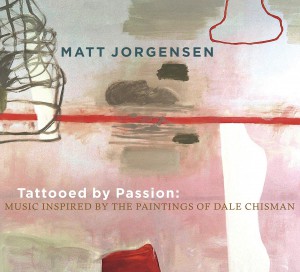 ... ambitious and beautiful ... Matt Jorgensen's finest recording to date.
- All About Jazz.com

Inspired by the paintings of his late father-in-law, the prominent abstract-impressionist artist Dale Chisman, drummer Matt Jorgensen has created a recording of all original works drawing influence directly from Chisman paintings, his home city of Denver, his life-long friends, and his constant reinvention as an artist. To properly reflect the power and expanse of Chisman's pieces, Jorgensen, along with his longtime collaborators - trumpeter Thomas Marriott and saxophonist Mark Taylor - expands his own palette from previous recordings, exploring broad new textures and musical landscapes aided by Corey Christiansen's earthy guitar work, bassist Dave Captein, and orchestrations for string quartet.

Reviews of Tattooed by Passion: Music inspired by the paintings of Dale Chisman

All About Jazz (Dan McClenaghan)
Drummer Matt Jorgensen pushes a bit out of the relative comfort zone of his longstanding Matt Jorgensen + 451 ensemble, to pay homage to his late father-in-law, abstract expressionist painter Dale Chisman, with Tattooed by Passion. With his + 451 group, Jorgensen crafted a distinctive modern-leaning sound on CDs Hope (Origin Records, 2004) and Anot ...

All Music Guide (Adam Greenberg)
Music based on visual art is nothing new (many know of Mussorgsky's Pictures at an Exhibition if nothing else), but can be a mixed bag in terms of quality. Though both art forms can show improvisation and structure, musicians have to walk a fine line: too literal in their transcription of color and strength and they risk making terrible music; too ...

Audiophile Audition (Jeff Krow)
Matt Jorgensen has created a profound moving work on Tattooed by Passion, his CD honoring his father-in-law, Dale Chisman, who was considered Colorado's most significant abstract painter for thirty years until his untimely death on August 29, 2008. Matt includes several photos of Dale's work in the liner notes, which give a clear indication of Chis ...

Jazz Society of Oregon (Kyle O'Brien)
The title alone is enough to give this one a spin. On closer look and listen, drummer Jorgensen's disc is a musical exploration of the paintings of Dale Chisman. The title is taken from Chisman's abstract impression of an upside down bass viol. The accompanying tune doesn't have the immediate impact as the painting, but the light tune does evoke a ...

Seattle Met (Eric Scigliano)
The Sound of Paint Sizzling: Matt Jorgensen's "Tattooed by Passion": Abstract art meets its musical match in a local composer's inspired new album. Painters from Vermeer to Picasso have celebrated music-making. Abstract expressionism is jazz played with a brush; Mondrian made boogie woogie out of squares and stripes. But musical homages to paintin ...

Cadence Magazine (Phillip McNally)
Finally drummer Matt Jorgensen leads a stellar 5tet on (4), and they work through an impressive series of compositions devoted to the painting of the late Dale Chisman. The nicely handled package displays several of the Chisman paintings which directly inspired Jorgensen, and makes listening to this set a programmatic experience. Trumpeter Thomas M ...

Downbeat Magazine (Eric Fine)
SEATTLE BEAT After a decade in New York, drummer Matt Jorgensen needed a change of scenery. His timing couldn't have been better. Returning to Seattle in 2002, Jorgensen not only established a reputation as a versatile sideman throughout the West Coast; he also helped operate a record label that was starting to receive attention. "The attract ...