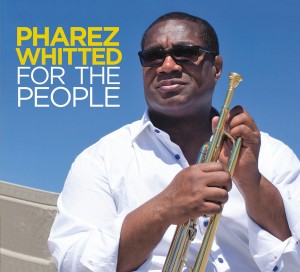 ...few have managed to channel (Hubbard) as effectively as Pharez Whitted, who honors the late giant with his combination of intensity and technique, spank and sparkle, and that hot-cider tone.
- Neil Tesser, Chicago Examiner

After a long hiatus from recording, Chicago trumpeter Pharez Whitted returned in 2010 with his critically acclaimed "Transient Journey," and now, with another set of crackling originals. Though deeply rooted in the tradition of Freddie Hubbard, Lee Morgan and Dizzy, Pharez looks only forward with a thoroughly vital sound and modern compositional approach. With his superb sextet, including guitarist Bobby Broom, saxophonist Eddie Bayard and pianist Ron Perrillo, Pharez further establishes his position as one of the top trumpet voices of his generation. "...a significant development for anyone who values the most serious forms of jazz improvisation and composition."

Reviews of For the People

Midwest Record (Chris Spector)
A Chicago blower came back from a hiatus a few years back with a set that just crackled and let you know he was back. This set follows in those footsteps quite well. Showing he knows his Blue Note moves down cold, Whitted isn't afraid to expand the post bop vocabulary bringing to mind trumpet greats of the past while charting his own course. High ...

All About Jazz (Dan Bilawsky)
Indianapolis-born trumpeter Pharez Whitted has kept a low profile in the new millennium. He's busied himself with teaching, attending to his duties as Director of Jazz Studies at Chicago State University, performing live and appearing as a sideman on a scant number of under-the-radar albums, but none of this has helped to boost his reputation beyo ...

Audiophile Audition (Jeff Krow)
(4 Stars) Pharez Whitted may be primarily known in the Midwest areas of Chicago and Indianapolis as a talented trumpeter, composer, and educator- however with the release of his new Origin Records release, For the People, that all may change. Pharez comes from a strong jazz musical heritage as his mother (bassist, Virtue Hampton Whitted) is the ...

DownBeat Magazine (Frank Alkyer)
EDITOR'S PICK - DECEMBER 2012 On For The People, Chicago-based trumpeter Pharez Whitted digs into the hard-bop bag and pulls out an 11-song set that?s perfect for a weekend chill or a serious road trip. The unison lines he plays with guitarist Bobby Broom on tunes like ?Watusi Boogaloo? are infectious. ?If They Could Only See? delivers a sweet ...

JazzIz Magazine (Ed Kopp)
Anyone who believes that mainstream jazz is growing less and less accessible should check out this aptly titled release from trumpeter Pharez Whitted. For the People is a catchy collection, but it's no pop-jazz trifle. Performing hard-bop originals marked by soulful melodies and bluesy grooves, Whitted's sextet demonstrates that accessible jazz n ...

Downbeat Magazine (Aaron Cohen)
Trumpeter Pharez Whitted does not hide his populist intentions He titled his latest album For the People (Origin) and loaded it with compositions that highlight a bright tone and optimistic spirit. "Music has the power to help mellow out some screwed-up philosophies," Whitted said at a cafe near his home on Chicago's South Side. "I'd like m ...