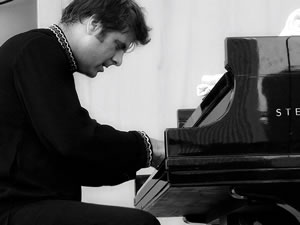 Born in New York City, Ron was inspired to study music by his parents who loved all forms of music and by his grandfather Angelo Perrillo who was a New York area guitarist and singer. His family moved to South Florida in 1973. There he attended Coconut Creek High School majoring in music, playing trumpet and baritone horn in their symphonic and jazz bands.

While still in high school he started playing piano for the BCC Neophonic Jazz Band under the direction of Bernie Switzer. After attending Broward Community College's jazz program studying under J.B. Dyas, he began freelancing with Florida greats Ben Champion, Jaco Pastorius, Randy Bernsen and Ira Sullivan as well as performing with visiting artists such as Dizzy Gillespie, Slide Hampton, Frank Wess and Michael Brecker. In 1990 Ron was one of five finalists in The Great American Jazz Piano Competition, the most prestigious event of its kind.

Ron was introduced to Chicago jazz audiences while on tour with Ira Sullivan in 1988 when he performed at Joe Segal's Jazz Showcase. His experiences while on tour with Ira Sullivan inspired him to move to Chicago in 1990. Shortly after arriving in Chicago he formed his current trio with bassist Dennis Carroll and percussionist Dana Hall. He's also played in groups with Chicago greats Von Freeman, Bobby Broom, Eric Alexander, Lin Halliday and Pharez Whitted.

Ron is a jazz studies lecturer for DePaul University and for the Thelonious Monk Institute through Chicago's Gallery 37 After School Matters program.