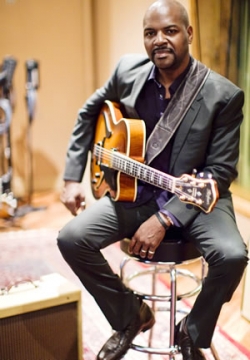 Bobby Broom is an extraordinary musician. I love playing with him.
Sonny Rollins

"Broom has one of the few truly recognizable styles among modern guitarists, and one of the most satisfying solo concepts in mainstream jazz," - Neil Tesser, Chicago Music Examiner

Most musicians would be happy to experience one artistic breakthrough. Just over thirty years into his distinguished, wide-ranging career in Jazz, guitarist Bobby Broom seems to have an endless supply of them.

His 2009 album, Bobby Broom Plays for Monk, featuring his long-standing Chicago trio, hit an artistic high-water mark with its "daring arrangements" (JazzTimes) and "small gems of musical discovery" (DownBeat). It capped a series of recordings designed to promote Broom, celebrated for his work with Sonny Rollins and Kenny Burrell's Jazz Guitar Band, as a leader and nurturer of young talent himself. In 2011, Broom's other band, the Deep Blue Organ Trio, achieved commercial mass attention with its fourth album, Wonderful!, a scintillating collection of Stevie Wonder songs. A crossover triumph in the best sense, it further affirmed why Steely Dan has requested them as their opening act on tours in recent years.

However you chart his success, Broom now belongs to a highly exclusive club of Jazz guitarists with a unique sound and pervasive influence.

When Broom was a 16-year-old prodigy attending New York's High School of Music and Art and performing several nights a week with pianist Al Haig at a 62nd Street club called Gregory's, he turned down an invitation from Sonny Rollins to go on the road. Only after attending the Berklee College of Music and beginning his career back home in New York City did he accept the offer four years later. He went on to enjoy two stints (1982-1987 and 2005-2010) with the great tenor saxophonist, who told DownBeat, "Bobby is one of my favorite musicians. He explains why I like the guitar. He's got a strong musical sixth sense."

He was asked to join Art Blakey's Jazz Messengers as that legendary band's first and only guitarist. Instead of signing up, along with new recruit Wynton Marsalis, Broom joined his Queens, NY friends Omar Hakim, Marcus Miller, and Bernard Wright in trumpeter Tom Browne's popular crossover band. Later, his GRP Records debut, Clean Sweep, was a polished blend of jazz and urban soul on which he sang and played in the vein of George Benson's mega-selling Breezin', and the keyboard-heavy Livin' for the Beat.

In 1984, he uprooted himself from New York and moved to Chicago, where he continued touring with Rollins, joined forces with Kenny Burrell, played briefly with Miles Davis's group, toured with Dr. John, and performed with such local Chicago stalwart players as organ veteran Charles Earland and young saxophonists Eric Alexander and Ron Blake. He also taught early on at the American Conservatory of Music and Roosevelt University and more recently at DePaul University and as part of the Ravinia Festival's jazz mentor program working with high school students.

In 1991, Broom launched his guitar trio with bassist Dennis Carroll and drummer Kobie Watkins. On Modern Man (2001), an all-star blowing session featuring Dr. Lonnie Smith, Ronnie Cuber, and Idris Muhammad, and two albums by his trio, Stand (2001) and Song and Dance (2006, which Pat Metheny called "one of the best jazz guitar trio records I've ever heard"), Broom offered smart reworkings of pop classics such as "Wichita Lineman," "The Letter," and "Layla." He showed forethought in taking a jazz approach to non-traditional material and embracing the value of reaching wider audiences who were unschooled in traditional jazz.