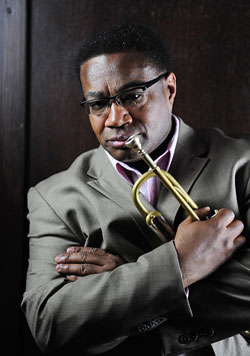 ...few have managed to channel (Hubbard) as effectively as Pharez Whitted, who honors the late giant with his combination of intensity and technique, spank and sparkle, and that hot-cider tone.
Neil Tesser, Chicago Examiner.

Pharez grew up in Indianapolis Indiana where he attended Shortridge High School, receiving his undergraduate degree from Depauw University and his graduate degree from Indiana University. He also was on the MoTown Jazz Label MoJazz where he released two CDs under his name Pharez Whitted and Mysterious Cargo. Pharez presently is director of jazz studies at Chicago State University.