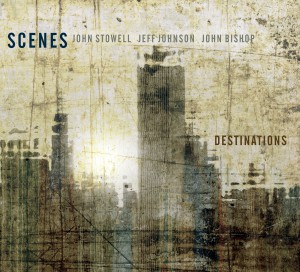 ...plush and understated blanket of sound...a seamless sonic poem that grows with each listen.
All About Jazz

After 15 years of performing together, the rapport between the legendary Portland guitarist John Stowell, and Seattlites, bassist Jeff Johnson and drummer John Bishop, has reached such a level of intimacy and connectedness, they transcend the traditional concept of a "guitar trio." Whether performing their intriguing originals or the thoughtful reimaginings of less-done classics, each piece is a ticket to somewhere unique, like a travelogue of where the trio's members have been and where they would like to go. Documented on five albums for Origin Records, their music continually inspires comments from reviewers bordering on the poetic:

"...images of chilly mists rolling into town off the cold Puget Sound, filmy tendrils drifting up dark, shadowy streets." - All About Jazz

"Fertile is the band's mind and talent for a sound ethereal." - All About Jazz

Midwest Record (Chris Spector)
A long standing guitar trio of Portland/Seattle cross pollination, their sound and vibe only deepens with each outing. A solidly burnished set that stands toe to toe with any modern genre highlight, this is sitting down jazz that gets you standing up and cheering. Smart, angular stuff that'll more than bring out the high tone, up market listener in ...

All About Jazz (Dan Bilawsky)
4-STARS There are wondrous stories to be found in everything the eye can see, the ear can hear, and the imagination can dream up. Scenes - the trio of guitarist John Stowell, bassist Jeff Johnson, and drummer John Bishop - has been readily and steadily making that point for more than fifteen years, harnessing natural beauty and concocting chimeric ...

WTJU, Richmond (Dave Rogers)
Veteran trio Scenes have performed together for 15 years and the melding of their individual and trio play is wonderful. Everyone has a voice and they blend together beautifully. This is their fifth release. The players are John Stowell (guitar), Jeff Johnson (bass) and John Bishop (drums). Stowell composed five songs and Johnson two and the covers ...

Jazz Weekly (George W. Harris)
The trio Scenes consists of cool-toned John Stowell/g, bassist Jeff Johnson and drummer John Bishop, and they bring together a collection of lithe originals and impressionistic jazz standards. Of the latter, Stowell exudes spaciousness and timber akin to vintage Jim Hall on the ESP-ish "Solar" while the team gets a bit bluesy on an indigo'd "You an ...

Ancient Victorys (Chris Lunn)
Stowell and Scenes have five other releases on Origin, and they just get tighter as they work off the deep understanding of each other's creative process. Jeff Johnson is one of the most sensitive bassists around with an incredible understanding of lyricism and moving inside the psyche. Bishop, in addition to being one of the head honchos for Origi ...

The New York City Jazz Record (Scott Yanow)
John Stowell is a veteran guitarist who, despite their different sounds and repertoire, can be thought of as a latter-day Jim Hall. Like him, Stowell is consistently relaxed both in his improvising style and in his sound. His choice of notes is advanced yet, due to his tone, his solos often sound soothing. He never plays the obvious and close liste ...

Amazon (Steve Wyzard)
Scenes have now released six albums for Seattle's Origin Records, and one doesn't have to look too far to find descriptions such as "introspective", "impressionistic", "haunted", "ethereal", "Sunday afternoon jazz", etc when their music is being discussed. I won't short-change 2017's Destinations album by calling it "more of the same", but would mu ...

Rifftides (Doug Ramsey)
Drummer John Bishop, guitarist John Stowell and bassist Jeff Johnson will soon be celebrating two decades together as the trio they call Scenes. Bishop founded the Origin label in Seattle in 1997, and by the fall of 2000 the three veteran Pacific Northwest musicians had combined in a group that has released six records on Origin. For all the sub ...

muszeroldal (Budapest) (Rudolf Radnai)
15 years of joint performance is already a good base for a trio of members to create something great on the new album of these three musicians and feel the way a person puts a high-level instrumental knowledge on the desktop as a fingertip. There is a drummer and a bass player here as a traditional guitar player. Most of his own compositions, with ...