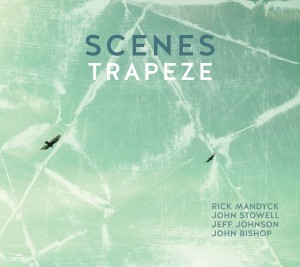 ...quietly stunning interplay...each musician establishes his identity firmly through melodic, conversational playing that is the epitome of modern, eclectic jazz.
All Music Guide

In 2000, master guitarist John Stowell met with the 8 year-old Seattle trio of drummer John Bishop, bassist Jeff Johnson & saxophonist Rick Mandyck to record the 2001 release Scenes. Soon after, Mandyck retired his tenor for health reasons and the remaining trio carried on, recording five more albums and performing widely over these 20 years. Mandyck's participation on this session marks the first time he has entered the studio on tenor since that 2000 recording, creating a moving moment for the others as he brings along not only his singular musical voice, but five compositions to inspire the core trio, opening up new pathways of conversation. Whether traversing the tumbling landscape of Mandyck's "The Reckoning," or sliding into Claudine Francois' beautifully hypnotic title track, the eclectic quartet glides toward a known destination while discovering the course in the moment. There is history to guide their impulse, intuition to find their way.

All About Jazz (Paul Rauch)
4-STARS The storyline for the Pacific Northwest-based band Scenes began in 1983, when drummer John Bishop and guitarist John Stowell began playing together in Portland and Seattle. When bassist Jeff Johnson arrived in Seattle in 1989, he began playing a weekly trio gig with Bishop and tenor saxophonist Rick Mandyck. Stowell, already frequently tra ...

Midwest Record (Chris Spector)
With the original line up coming together for the first time in 20 years, they play together like they haven't missed a step. With most of the tunes by the MIA sax man who originally left for health reasons, everyone is right back in step. With a Seattle take on a New York feel for modern sax jazz, it's that hypnotic kind of set that breathes wel ...

Jazz'halo (Belgium) (Georges Tonla Briquet)
Not a theater or circus act, but four seasoned musicians who almost hypothermic but with precision allow themselves the pleasure of making music together again for an hour. Again because they did this already in 2000. Tenor saxophonist Rick Mandyck opted to choose a different direction afterwards for health reasons, while guitarist John Stowell , b ...

Cadence Magazine (Frank Kohl)
Interplay is the name of the game with Scenes new release "Trapeze". Saxophonist Rick Mandyck's tune, "All Day Pass", opens the set. It's a medium tempo, well crafted original with lots of open space. All players participate, carefully listening to each other, bending twisting and creating a dark and mysterious canvas. Rick's strong tone and his ab ...