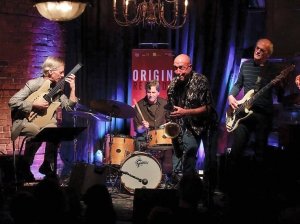 Considerably absorbing... their rapport has reached an enviable tightness. Dynamically astute and rhythmically sensitive, this is very satisfying music, the kind of interactive Jazz that doesn't hit you over the head as much as insinuate itself into your consciousness.
Stuart Kremsky, Cadence

After two decades of performing together, the rapport between the legendary Portland guitarist John Stowell, and Seattlites, saxophonist Rick Mandyck, bassist Jeff Johnson and drummer John Bishop, has reached such a level of intimacy and connectedness, they transcend the traditional concept of a "jazz quartet." Whether performing their intriguing originals or the thoughtful reimaginings of less-done classics, each piece is a ticket to somewhere unique, like a travelogue of where the quartet's members have been and where they would like to go. Documented on seven albums for Origin Records, their music continually inspires comments from reviewers bordering on the poetic: "Whispers of intelligent messages." Jazz Weekly - "...images of chilly mists rolling into town off the cold Puget Sound, filmy tendrils drifting up dark, shadowy streets." All About Jazz - "Fertile is the band's mind and talent for a sound ethereal." All About Jazz.