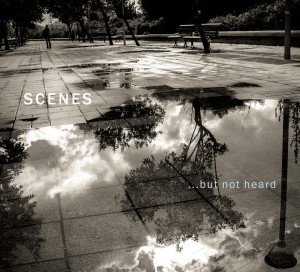 Having performed together for 12 years, the musical and personal rapport between guitarist John Stowell, bassist Jeff Johnson, and drummer John Bishop has attained what Cadence magazine calls "an enviable tightness." Whether performing their intriguing originals or the thoughtful re-imaginings of less-done classics, each piece is a ticket to somewhere unique. On "...But Not Heard," the trio is joined by a long-time compatriot, saxophonist Hans Teuber who adds several original tunes and another deeply integrated and sympathetic voice to the ensemble.

Reviews of ...but not heard

emusic (Dave Sumner)
Scenes, a trio of guitarist John Stowell, bassist Jeff Johnson, and drummer John Bishop, typically plays straight-ahead modern jazz, though Stowell has a peculiar form of voicing in a guitar trio setting that imbues the music with a spectral presence, as if he isn't stating a melody so much as suggesting that its there. That tends to make for a c ...

Midwest Record (Chris Spector)
With 12 years together under this trio's belt, they came along just too late to be the crew that would have made BMG extend the deal on Windham Hill Jazz. Cerebral jazz with a warmer edge than ECM cool school cerebral jazz, this is wonderful set of thoughtful jazz that doesn't make you work to listen to it. The kind of in the pocket music that yo ...

All About Jazz (Dan McClenaghan)
ECM Records has been noted for its "Nordic Cool," school, from its many recordings of Scandinavian artists, with pianist Tord Gustavsen coming most readily to mind. Seattle's Origin Records has what can be called its "Northwest U.S. Cool" with recordings from bassist Jeff Johnson, saxophonist Hans Teuber , and the collective trio Scenes, with ...

All About Jazz (C. Michael Bailey)
Of their second recording, Along The Way (Origin, 2006), guitarist and All About Jazz contributor John Kelman said, "There's an airy, ECM-like feel to much of the album... more in its aesthetic than any direct stylistic reference." That immediately frames the music of guitarist John Stowell, bassist Jeff Johnson and drummer John Bishop, giving i ...

Jazz Weekly (George W. Harris)
The trio Scenes consists of John Stowell/g, Jeff Johnson/b and John Bishop/dr, who are joined by the sax and flute of Hans Teuber for a collection of subtly swinging originals. Tunes such as "C Minor Waltz" and the bluesy "Nanti Glow" have Teuber's tenor softly blowing on the gently flowing melodies, while the more kinetic fast spotlights deft ...

Ancient Victorys (Chris Lunn)
This is Scenes' fifth recording by major NW jazz musicians and includes the owner of Origin's highly successful recording company, John Bishop, on drums. All the songs were penned by the musicians, starting off with the "C Minor Waltz" that has the author, Hans Teuber, on lyrical sax working above the Stowell warm guitar dance lines and the maj ...

Jazz Society of Oregon (George Fendel)
Students of jazz are always told to listen to everyone, borrow what inspires them, but give it back eventually. Because their most important assignment is to find a voice of their own. Many flattering things can be said of Portland guitarist John Stowell. And one of them is that he is very much his own man in a highly creative musical sense. He eve ...