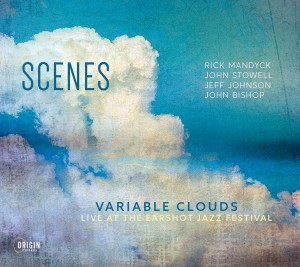 ... harnessing natural beauty and concocting chimerical designs that extol the virtues of elasticity, mutability, and high-level communication. The Pacific Northwest knows no greater champion of its beyond-words beauty than this outfit.
All About Jazz

Over the course of 30 years of friendship and playing music together, much is revealed. Since Scenes' debut recording in 2001, saxophonist Rick Mandyck, guitarist John Stowell, bassist Jeff Johnson and drummer John Bishop always seemed to find new and unique destinations every time in the studio. It as well translated night to night on the bandstand as revealed here on their first live recording. Coming as it did after a year and a half of lockdown and few live performances, there was a palpable sense of connectedness between audience and band, each needing the moment and accepting the unanticipated wash of emotions. The band performs originals from Mandyck, Stowell and Johnson, along with Mandyck's masterful reading of the classic "It's Easy to Remember," and closes with Jim Pepper's well-traveled "Witchi Tai To," derived from a Native American Church healing chant.

Reviews of Variable Clouds: Live at the Earshot Jazz Festival

Jazz Weekly (George W Harris)
Timeless post bop is delivered by the quartet of Rick Mandyk/ts, John Stowell/g, Jeff Johnson/b and John Bishop/dr on this swinging live set at the Town Hall in Seattle Washington. The entire band sounds like they're both inspired and rejuvenated by the end of the COVID lockdown, with everyone sounding celebratory in delivery. Mandyk's tenor smo ...

All About Jazz (Paul Rauch)
4-STARS - Scenes' first album dates back to 2001, but the origins of the band dates back to the early 1990s, when saxophonist Rick Mandyck, bassist Jeff Johnson and drummer John Bishop initiated a trio gig. On occasion guitarist John Stowell would drop in if he was off the road and in Seattle. The band that began as a trio reverted back to that for ...

Earshot Jazz (Paul Rauch)
The Northwest trio/quartet Scenes dates back twelve years or so prior to their 2001 album debut. Over the years, the band became a trio featuring guitarist John Stowell, bassist Jeff Johnson, and drummer John Bishop due to injuries that forced tenor saxophonist Rick Mandyck into a fourteen-year hiatus from playing the saxophone. Mandyck returned ...

All About Jazz (Dan McClenaghan)
4-STARS - The group Scenes has released seven excellent albums over two decades of recording together, beginning with their eponymous debut (Origin Records, 2001). All of those are studio efforts. The group's 2022 outing, Variable Clouds is a first for Scenes—their first album recorded live in front of an audience, in 2021 at the Earshot Jazz Fes ...

Seattle Times (Michael Rietmulder)
20 BEST SEATTLE ALBUMS OF 2022 14. Scenes, "Variable Clouds: Live at the Earshot Jazz Festival" It's a welcome sign that live music has been "back" long enough for live albums to trickle in among the deluge of post-lockdown releases. Recorded last year at Town Hall during Seattle's preeminent jazz festival, this long-running quartet (featuring ...