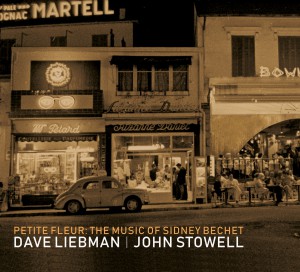 ...a conversation between masters of their craft...sensitive and sublime...a marvelous collection of melody, harmony and joie de vivre.
Jazz Weekly

Though a legendary figure from his monumental contributions to the clarinet and soprano saxophone's role in jazz, it was the compositions of Sidney Bechet that inspired master saxophonist David Liebman and guitarist John Stowell to dig deep into his catalog to compile and explore this set of rarely heard gems. Each possessing singular voices themselves that have inspired generations of other performers, Liebman & Stowell have created a very personal and intimate duo project celebrating another giant's work, their conversations making for compelling listening. "Guitarist Stowell and saxophonist Liebman find simple ways to express their expansive lexicon, and raise the intensity without shattering the resultant peaceful ambiance." - EMUSIC.

Reviews of Petite Fleur: The Music of Sidney Bechet

All About Jazz (Dan McClenaghan)
5-STARS Saxophonist Dave Liebman leans "outside" for the most part. He came to a measure of fame back in the bands of Miles Davis, during one of the influential trumpeter's decidedly outside periods—the 1970s, when Liebman participated in Davis' On The Corner (Columbia Records, 1972), Dark Magus (CBS-Sony, 1975), and Get Up With It (Columbia, 1 ...

Midwest Record (Chris Spector)
On their third pairing for the label, this duo tackles the works of Sidney Bechet with Leib giving such an expected performance that duo is all that's needed here. For all the various miles he's racked up under his belt, this return to the ground zero of soprano sax is a mind blower. With an after-hours and a from the heart feel that rings genuin ...

New York City Jazz Record (Ken Dryden)
Dave Liebman has an intense musical curiosity, prompting him to plan for many future projects simultaneously in the midst of teaching, touring and composing, the only restraint being able to find the funding and time. Liebman has never been an easy artist to categorize stylistically because of his wide range of interests and willingness to collabor ...

L.A. Jazz Scene (Scott Yanow)
Soprano, tenor and flutist Dave Liebman has recorded many albums during the past 50 years, ranging from Coltranish explorations and free form interplay to special standards projects. Whether playing unaccompanied solos or with a big band, Liebman can always be relied upon to create inventive improvisations. Still, Petite Fleur is rather unexpected. ...

Jazziz (Larry Blumenfeld)
The most striking thing about the recent release Petite Fleur: The Music of Sidney Bechet is the sound of Dave Liebman's soprano saxophone on the opening title track, Bechet's best-known composition. That sound is large and pungent, with each held note featuring a bold and tightly wound vibrato--a far cry from the looser, more urgent sound, often l ...

Cadence (Robert Rusch)
JOHN STOWELL [gtr] and DAVE LIEBMAN [ss/flute/p] have previously worked together on Origin twice. PETITE FLEUR [Origin Records 82753] is their latest pairing [4/17]. The focus this time is on the music of Sidney Bechet and it is a beauty. There's no attempt to duplicate Bechet's wide vibrato - no need to as Bechet stands alone as the first great so ...

JazzTimes (Mac Randall)
Jazz innovator, early soprano saxophone pioneer, gifted improviser with a tone so distinctive it can be recognized within microseconds--this is what musically knowledgeable folks tend to think of when Sidney Bechet's name comes up. Composer? Not so much. But the New Orleans legend's catalog of originals was sizable, and fellow soprano master Dave L ...

JazzEd (Dan Bilawsky)
Sidney Bechet is rightly hailed as one of the seminal figures of this music, putting his stamp on the NOLA clarinet tradition shortly after its dawn, codifying and expanding the soloist's language through his early recordings, and blazing a trail on soprano saxophone. But he was also a fine melodist, a fact which is often overlooked when his accomp ...

Jazziz (Editor)
If you play the soprano saxophone, at some point, you'll have to confront the legacies of John Coltrane and Sidney Bechet. In 2017, soprano virtuoso Dave Liebman saluted the former on Compassion: The Music of John Coltrane, which paired him with tenor saxophonist Joe Lovano. This year, he teams up with guitarist John Stowell to pay homage to the la ...

MultiKulti Project (Poland) (Dawid Malanowski )
5-STARS Steve Lacy, one of the great innovators of jazz, considered Sidney Bechet to be a genius, New York clarinettist David Krakauer repeatedly paid him a musical tribute, now Dave Liebman, who played in groups of the greatest jazz fans such as John Coltrane, Elvin Jones, and Miles Davis reaches for his compositions. In 2011, Liebman received th ...