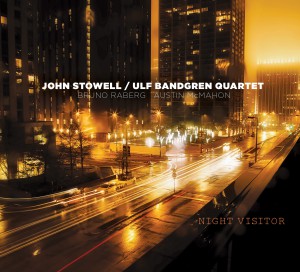 The interplay between the guitarists is exemplary. Over and over again, soloing and accompanying, they create a complete orchestra.
Jazzflits, The Netherlands

Roaming the world with his guitar over the last 40 years, John Stowell has developed significant musical relationships with numerous artists along the way, including Swedish guitarist Ulf Bandgren who has been a consistent and inspired partner for ten years. Last heard together on their 2012 duo recording, "Throop," they gathered in Boston in the spring of 2016 to record this quartet set with the accomplished rhythm section of bassist Bruno Raberg and drummer Austin McMahon. The band's easy chemistry, engaging original compositions and rhythmic vitality make for a compelling and entertaining listen. "John Stowell plays jazz, but he doesn't use any of the cliches; he has an incredible originality. John is a master creator." - Larry Coryell.

Midwest Record (Chris Spector)
Suppose in the classic ECM years, Eicher wanted to make a lightly commercial date with Ralph Towner facing off against John Abercrombie. That's kind of what this duo guitar led date feels like. Progressive without hitting the church basement, proficient without rubbing your face in it, this easy going date might be the soundtrack to a ‘what kin ...

WTJU - Richmond (Dave Rogers)
Guitarists John Sowell and Ulf Bandgren last recorded together five years ago, but they renew their wonderful interplay and compatibility as if there has been no time gap. Larry Coryell further amplifies, "John Stowell plays jazz, but he doesn't use any of the cliches; he has an incredible originality. John is a master creator." The performance is ...

Jazz Weekly (George W. Harris)
Cool toned guitarist John Stowell joins with fellow guitarist Ulf Bandgren and his team of Bruno Raberg/b & Austin McMahon/dr for sublime and pastoral musings. Except for the loosely grooved "Ode to Spring," everything here is subtle and water color impressionistic. Raberg's bass plays a pivotal role, gently nudging the fragrances forward as on the ...

Jazzenzo (Netherlands) (Georges Tonla Briquet)
The album 'Night Visitor' is a meeting between guitarists John Stowell and Ulf Bandgren that does not turn into pirouettes and technical delights, but leads to a soundtrack for a nightly city walk. American guitarist John Stowell and his Swedish colleague Ulf Bandgren have been playing together on a regular basis for more than ten years. Their p ...

Ancient Victorys (Chris Lunn)
After the last issue covering Stowell with Liemban CD on soprano and interpreting Sydney Bechet tunes. Here, he teams up with another guitarist, Ulf Bandgren, plus the bass of Bruno Raeberg and drums by Austin McMahon. The compositions are by Stowell (3) and Ulf Bandgren (3) on guitars and Bruno Raeberg (4) on bass. Austin McMahon adds drums. Here, ...