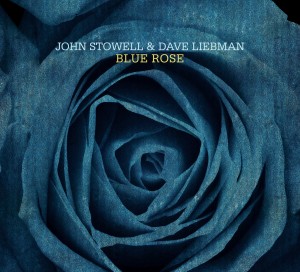 A gorgeous, uncluttered set, exploring the purity and beauty of the familiar.
-Dan McClenaghan, All About Jazz

The singular guitarist John Stowell and saxophone legend Dave Liebman have been friends and colleagues for decades and occasionally find time to perform or record together, such as on Stowell's 2002 release, "The Banff Sessions" (Origin). For "Blue Rose," Stowell and Liebman gathered at a studio in the heart of the Pocono Mountains for an intimate set of duets, performing standards such as Cole Porter's "Everything I Love," along with compositions from modern jazz composers, including Wayne Shorter's "Black Eyes" and Kenny Wheeler's "Everybody's Song But My Own."

All About Jazz (Dan McClenaghan)
Saxophonist Dave Liebman joined guitarist John Stowell and bassist Don Thompson on three tunes on Stowell's The Banff Sessions (Origin Records, 2002). More than a decade later, Stowell and Liebman have teamed up on a duo outing, Blue Rose. The two artists' take on a bunch of jazz standards and Great American Songbook tunes has a beautiful fluidit ...

Midwest Record (Chris Spector)
Because Liebman spends so much time over achieving and pushing envelopes, it's easy to forget what a wonderfully lyrical player he is when he just kicks back and lets the flow just flow. A shining guitar/sax stand off, this set follows up the one recorded by these two a decade back, the difference being that the last was recorded in Banff, this r ...

emusic (Dave Sumner)
Jazz Picks of the Week - A relaxed conversation between two jazz veterans at the top levels of their respective instruments. Guitarist Stowell and saxophonist Liebman find simple ways to express their expansive lexicon, and raise the intensity without shattering the resultant peaceful ambiance. ...

Louisville Music News (Martin Z. Kasdan Jr.)
Guitarist John Stowell was a guest artist at several of the Bellarmine University Jazz Guitar Workshops and Concerts, and saxophonist (and more) Dave Liebman has appeared here many times over the years, at the University of Louisville and elsewhere. Together, they have crafted an elegant and warm album of duets featuring their interpretations of ma ...

Jazz Society of Oregon (George Fendel)
There must have been something in the air this month, because here comes yet another soprano saxophone record. Actually, Liebman plays some tenor here as well. He meets up with Portland-based favorite John Stowell in a highly communicative duo session on some memorable material. One can?t argue their varied choice of tunes featuring American Songbo ...

Jazz Weekly (George W. Harris)
RINGER OF THE WEEK If you're not a sucker for duet albums, maybe THIS one will change your mind. Acoustic guitarist John Stowell sits down by the fireplace with Dave Liebman for a collection of duets that sounds like a conversation between masters of their craft, which is exactly what it is. Liebman, who is better known for being a bit on the l ...

All About Jazz (VICTOR L. SCHERMER)
In the search for enriched jazz expressiveness, the duet format has been revived, giving the musicians greater space for improvising than a larger group and avoiding the overpowering influence of a rhythm section, while affording an opportunity to engage personalities and "swap notes" with another whose ideas and style are of special interest. Ic ...

Ancient Victorys (Chris Lunn)
Stowell, for the mid-late 70s jazz shows at the Tracks in Auburn, is on a roll of CD releases. We reviewed another duet in the Fall 2013 issue with Throop, and in April he tours the Northwest with our Kendra Shank to support a duet CD they are completing. Here, he teams with Dave Liebman on soprano, tenor, piano, and wood flute. They did a trio thi ...