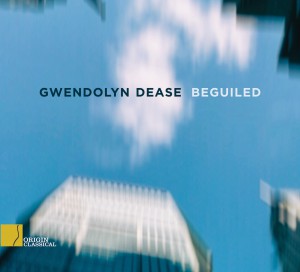 Marimbist Gwendolyn Dease takes a bold step forward with her fourth recording, cultivating enchanting commissions from a topnotch assembly of contemporary jazz composers. Grammy-Nominated composer and legendary jazz bassist Rufus Reid crafted the title piece while other selections feature star members of the Metropolitian Opera Orchestra, Pat Metheny Quartet, WDR Orchestra and Wynton Marsalis' Jazz at Lincoln Center Orchestra. Dease's program features her nuanced phrasing highlighted against similarly virtuosic muted and natural trombone stylings, rich acoustic double bass and in several enticing chamber pairings and trios. With this release, Dease not only confirms her stature as one of the leading marimba artists in music today, but also shows that she is a visionary role model for the future of her instrument as fans of contemporary classical and jazz music become "Beguilded".

All About Jazz (Dan Bilawsky)
4-STARS While this fourth album from marimbist Gwendolyn Dease is rightly seeing release on the classical arm of Origin Records, it wouldn't have been completely out of place if it had landed on the jazz side of that imprint. Dease bypasses contemporary marimba fare and late twentieth century favorites from the usual suspects like Ney Rosauro, Ca ...

Improvijazzation Nation (Dick Metcalf)
For some reason, marimba doesn't come across as something I think about a lot in the jazz arena… but in Gwendolyn's talented hands, you'll be amazed at the deep and rich textures she's able to paint on tunes like the opener, "Beija-flor", (penned by jazz bassist Rufus Reid)… one of the reasons (I believe) why this is so aurally attractive is be ...