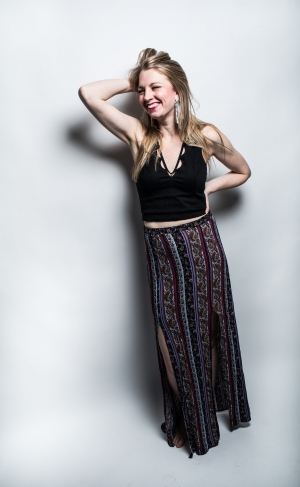 [Johnson] becomes the song with her commanding control and confident tone.
C. Michael Bailey, All About Jazz

Aubrey Johnson is a New York-based vocalist, composer, and educator who specializes in jazz, Brazilian, and creative contemporary music with and without words. She holds a Master of Music degree in jazz performance from the New England Conservatory and will be releasing her debut album, of her own compositions and arrangements, in the fall of 2019. She currently teaches at Berklee College of Music in the Voice Department, and in the Jazz Masters Program at Queens College in New York City. She has also held faculty positions at the New England Conservatory and Montclair State University.

In 2007 she relocated to Boston to pursue a Masters Degree in Jazz Performance at the New England Conservatory, where she studied with Danilo Perez, Jerry Bergonzi, Dominique Eade, Allan Chase, George Garzone, and Frank Carlberg. While at NEC, Aubrey founded, directed and arranged for an official vocal jazz ensemble at the school. In 2009, Aubrey graduated with honors, was awarded the "Gunther Schuller Medal" for "making an extraordinary contribution to the life of the school," and won her third DownBeat Magazine Collegiate Student Music Award, for outstanding performance in jazz voice.

In 2009 and 2010, Aubrey performed (singing wordlessly and playing auxiliary keyboards) with Lyle Mays (keyboardist of the Pat Metheny Group), including shows at the Zeltsman Marimba Festival and the Gilmore Keyboard Festival. Also in 2010, she recorded on Bobby McFerrin's Grammy-nominated EmArcy release VOCAbuLaries.