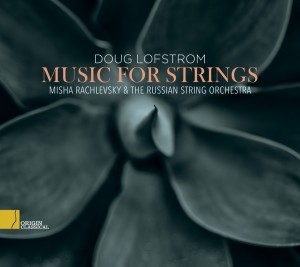 Chicago composer Doug Lofstrom has been writing prolifically since the 1970s, with his wide-ranging style reflecting ongoing involvement in dance, film, theater and symphonic music. He has been composer-in-residence for the Metropolis Symphony Orchestra and musical director of Chicago's Free Street Theater, while his works have been performed by numerous American Symphony Orchestras and chamber ensembles over the decades. Music for Strings is comprised of four pieces Lofstrom began work on in the late '70s, starting with the three movement composition by the same name, which was originally recorded in 1984 and premiered by the Metropolis Symphony Orchestra. Here, Lofstrom presents these pieces together for the first time with fresh interpretations by Moscow's Russian String Orchestra. Conducted by the orchestra's founder, Misha Rachlevsky, the ensemble is now in its 3rd decade. "Simply beautiful!" - The Intermezzo

Reviews of Music for Strings

Jazz Weekly (George W Harris)
Music composed by Doug Lofstrom is deliciously performed by the Russian String Orchestra, conducted by Misha Rachlevsky on this rich collection of original and fresh classical works. There are four major pieces, all of which brim over with musicality and grace. A three piece "Music For Strings" includes rich Britten-esque lilts, rich pizzicato'd sw ...

WDR3 Radio (Berlin) (Daniela Ziemann)
(Radio Broadcast) The American composer Doug Lofstrom spent five years working on his opera "Two soldiers". After that he was burned out and started an experiment to get his creativity back to life. In August 1989 he wanted to write one piece of music - for a lunar cycle. As he himself says, the results were widely different. From the best ideas he ...

Textura (Ron Schepper)
The earliest material on this thoroughly appealing collection of classical material by Chicago composer Doug Lofstrom dates back to 1971, yet Music for Strings sounds as fresh as the day it was born. How the Russian String Orchestra and its conductor founder Misha Rachlevsky came to perform the four Lofstrom works on the release isn't clarified; re ...