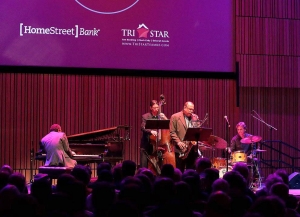 Since their inception in 1988 and over the next 20 years, Seattle-based New Stories divided it's time between performing as a trio and as the backup group to some of the greatest names in jazz. Made up of pianist Marc Seales, bassist Doug Miller and drummer John Bishop, they have four critically acclaimed CDs of their own, six with the late be-bop saxophone great Don Lanphere, and the Grammy nominated "Song for the Geese" for RCA with Mark Murphy. The trio was a house group for 17 years at Bud Shank's Pt. Townsend Jazz Festival; was the first US jazz group to perform in the former USSR's far east - at the 1993 JVC Jazz Festival in Vladivostok, Russia; appeared in concert with Tom Harrell, Nick Brignola, Slide Hampton, Conte Condoli, Bobby Shew, Jon Faddis, & Larry Coryell; and regularly presented concerts and clinics around the country by themselves or in appearances with Don Lanphere, Mark Murphy or Ernie Watts. Their music was included on a compilation CD for Universal Music: "Repertoire: A Starbuck's Collection of Unforgettable Piano Jazz," and was embedded as a music sample in Windows XP, which went on to sell 700 million units. Their 2004 release, "Hope is in the Air: the Music of Elmo Hope," was produced by Don Sickler at Rudy Van Gelder's legendary studio in NJ, and spent several months on the charts.