Steve Korn's debut on Origin Records, HERE & NOW, is his first as a leader and it is excellent.
Paula Edelstein

There's this idea out there that drummers are not really musical, that their capacities don't necessarily extend beyond hitting things. For those interested in moving past that old prejudice, we submit Steve Korn's wonderfully original first CD, Here & Now.


If recordings were people, this is one you would want to have as a personal friend. Steve Korn's music is both spirited and sensitive, with a sound unique to itself. A sextet recording, featuring tenor sax, trumpet and guitar, plus piano, bass and drums, Here & Now displays a striking synergy between composition and performance. The word is nimble. With six jazz virtuosi at the ready, Korn develops fascinatingly fresh sonic structures, everything from rich ensembles through quirky, surprising textures, with lots of space, of course, for keenly apt solos. Everyone shines, from the musically wise Jim Knapp through the irrepressible Marc Seales, but special mention must be made of guitarist Dave Peterson, the great and greatly under-recognized stealth weapon of Northwest jazz, whose pure, ringing sound is put to so many distinctive uses.


For Steve Korn's band sings instead of screams. It's a pleasure to listen to music which is not merely evidence of great emotional upheaval, but rather an outpouring of gracious lyricism delightfully spun by six mature, inspired talents. A listener almost wishes that the drummer had chosen to show off a little more, but after more than an hour of music which both honors and adds to its tradition, one realizes that he has.

Reviews of Here and Now

Earshot Jazz (Jason West)
It's possible that the jazz fans of the next 1000 years will revisit the Seattle sound at the turn of this century. If so, John Bishop's independent label, Origin Records, will enjoy a number of reissues. Representing a small circle of local players, Origin’s catalog sports over a dozen releases, the most recent being one of the best: Steve K ...

Jazz Review (Paula Edelstein)
Review: Steve Korn's debut on Origin Records, HERE & NOW, is his first as a leader and it is excellent. The nine compositions are a perfect balance of musical designs that feature his successful sextet of Rob Davis on tenor saxophone, Jim Knapp on trumpet, Dave Peterson on guitar, Marc Seales on piano and Jeff Johnson on bass. Rob Davis kicks off t ...

Jazz Times (Josef Woodward)
Stereotypes be damned: Drummers can be creative spark plugs at the head of a band, regardless of where they sit on stage. Sometimes, they're blessed with a greater sense of musical overview than other instrumentalists. It makes sense, coming from musicians who juggle support and expression on a continuous basis. Two recent releases by lesser-known ...

All Music Guide (Dave Nathan)
A drummer who is a leader has to be aware not to take advantage of his position by overwhelming his fellow players and listeners with long, non-directional solos, yet at the same time let it be known that this is, in fact, his or her album, often a difficult balance to achieve. Steve Korn handles this problem very nicely by not letting it become a ... 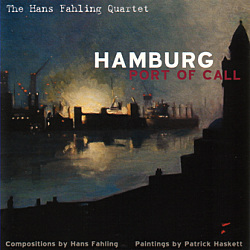