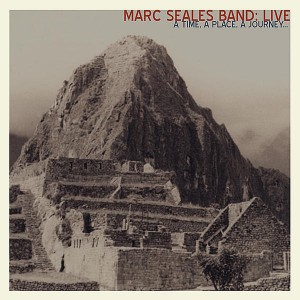 Seales' playing is exceptional, as he can take longer solos than usual but keep them tied into the song structures surprisingly well.
Adam Greenberg

After 25 years as a sideman to some of the greatest names in jazz, pianist Marc Seales explores his own compositions in an eclectic live program focusing on his "electric" side. Along with his longtime Seattle band (including drummer Steve Korn and saxophonist Mark Taylor) Seales adds the forward-looking guitar work of Fred Hamilton from North Texas University and Southern California percussionist Lary Barilleau. From the open, improvisational explorations of "Long March" to the introspective gospel standard "Deep River," Seales stays close to his roots which run deep and wide.

Reviews of A Time, A Place, A Journey

All Music Guide (Adam Greenburg)
Breaking from his usual reliance on the acoustic piano, Seattle jazz veteran Marc Seales here takes on the more electric end of affairs for his debut album as a leader, recorded live at a local jazz club. The album opens up with "Waiting," a catchy number that's taken softly on a grand piano with accentuation by longtime Seales compatriot Phil Spar ...

All About Jazz (Marius Nordal)
University of Washington professor Marc Seales has been an active part of the Northwest mainstream jazz scene for over thirty years. He has appeared on dozens of recordings and has worked with many players including Benny Carter, Joe Henderson, Eric Alexander, Don Lanphere, Mark Murphy and Slide Hampton. In addition to leading his own group "Ne ...