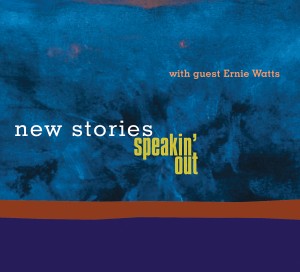 ...individually and collectively, up-tempo, and with fire in their eyes.
Jim Santella

Origin Records celebrates the 20th Anniversary of an album that ended up as a centerpiece of the catalog over these decades. The members of New Stories each played a significant role in the sound of the label through their early contributions to multiple recordings, but it was their 2000 release with saxophonist Ernie Watts that added an international presence for the label, through the inclusion of "Highway Blues" as an embedded sound file in Microsoft's Windows XP operating system. With XP selling 700 million copies over the next decade, "Highway Blues" was an easily accessed sound file in those pre-digital music days. Since then, the album's sales have remained steady and - completely unforeseen - the track was a go-to source for background music to those discovering and learning to use the new Youtube platform, providing music for thousands of videos (including untold numbers featuring cats!). Teaming again with Ernie Watts, Origin and the trio celebrated the anniversary with a reunion concert at the 2019 Ballard Jazz Festival, captured completely in HD video by Northwest radio station, KNKX.

From their inception in 1988 and over the next 20 years, Seattle-based New Stories divided its time between performing as a trio and as the backup group to some of the greatest names in jazz. They have four recordings of their own, six with the late be-bop saxophone great Don Lanphere, and the Grammy nominated Song for the Geese for RCA with Mark Murphy. The trio was a house group for 17 years at Bud Shank's Pt. Townsend Jazz Festival; was the first US jazz group to headline in the former USSR's far east - at the 1993 JVC Jazz Festival in Vladivostok, Russia; appeared in concert with Tom Harrell, Nick Brignola, Slide Hampton, Conte Condoli, Bobby Shew, Jon Faddis, & Larry Coryell, and regularly presented concerts and clinics around the country by themselves or in appearances with Don Lanphere, Mark Murphy or Ernie Watts. Their music was included on a compilation CD for Universal Music: Repertoire: A Starbuck's Collection of Unforgettable Piano Jazz, and "Highway Blues" from Speakin' Out was embedded as a music sample in Windows XP. Their 2004 release, Hope is in the Air: the Music of Elmo Hope, was produced by Don Sickler at Rudy Van Gelder's legendary studio in NJ, and spent several months on the charts.

Reviews of Speakin Out

Cadence (Jim Santella)
New Stories insures that the music swings and everyone solos. Their composed tunes have a built-in drama to hold your interest. From the modern mainstream, the ensemble speaks out through impressionism as well as with concrete formulae. Formed in 1988, the Seattle trio has two earlier recordings. Marc Seales and Doug Miller contribute poignant melo ...

All Music Guide (Dave Nathan)
For their second album, the New Stories trio pretty much follows the same blueprint it used for its first album for setting its program, mostly originals with a few pop and jazz standards added on. The major difference from the initial outing is the addition of hard blowing tenor sax man Ernie Watts on some of the tracks. When he's there, he forces ...

Berman Music (Butch Berman)
Add another new chapter to New Stories expanding catalog with their current Origin release Speakin' Out with Ernie Watts - and you'll be assured of a guaranteed best seller. This Seattle-based trio, consisting of pianist Marc Seales, bassist Doug Miller, and drummer John Bishop, just keeps getting better and better at refining the art. They comb ...

Midwest Record (Chris Spector)
With enough bona fides that you could easily call this trio (+ 1) The little band that could', they are celebrating the 20th anniversary of the release that started it all for them. A personable set that has aged well, this is a fine example of jazz for the masses where art and commerce meet with a big hug. Tasty stuff with the flair to take it ano ...

All About Jazz (Jack Bowers)
4-STARS New Stories is a seasoned piano trio (and a very good one) rendered even more persuasive on Speakin' Out by the singular presence (on five of nine tracks) of renowned saxophone maestro Ernie Watts. The trio itself consists of pianist Marc Seales, bassist Doug Miller and drummer (and Origin Records founder) John Bishop. The wide-selling alb ...

All About Jazz (Edward Blanco)
4-STARS Celebrating the 20th Anniversary of a ground-breaking album in their catalog of jazz, Origin Records reissues Speakin' Out from the Grammy-nominated Seattle-based trio with guest Ernie Watts on saxophones. The trio consisting of pianist Marc Seales, bassist Doug Miller and drummer John Bishop, were instrumental in developing the label's so ...

Earshot Jazz (Harold Hollingsworth)
I've often thought of music in terms of color and pattern. This goes the other direction as well, when asked about the complexity of abstraction in art, I've often used music as a pathway to assist in visualizing. There can be shortcomings, of course, in reviewing or assessing with this technique, but in general, I find it's valuable for opening a ...

The New York City Jazz Record (Jim Motavalli)
New Stories is a Seattle-based trio that loves to work with guests. Marc Seales (piano), Doug Miller (bass) and John Bishop (drums) made six albums with the late bebop saxophonist Don Lanphere, another with singer Mark Murphy (Grammy-nominated Song for the Geese) and four under their own name. Telling all kinds of new stories, they've worked with T ...