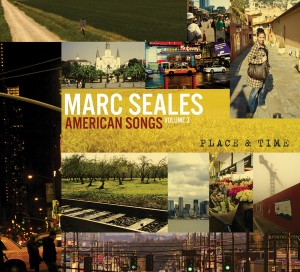 Whether performing with the heaviest jazz luminaries or with his own bands, pianist Marc Seales' deeply lyrical and blues-based approach to modern jazz has helped define the sound of Jazz in the Northwest for several decades. For his third recording in his "American Songs" series, Seales brings together his longtime compatriots - guitarist Fred Hamilton, drummer Gary Hobbs, and bassists, Jeff Johnson and Dave Captein - to tackle a set that includes R&B / Soul classics such as Curtis Mayfield's "Pusher Man" and "Freddie's Dead," the Jimmy Webb hit "Wichita Lineman," and a collection of Seales' originals, inspired by places and journeys.

Midwest Record (Chris Spector)
The jazz man brings the funk with his third set of his version of jazzy Americana where Curtis Mayfield, Stevie Wonder and Isaac Hayes’ take on “Wichita Lineman” figure prominently. Showing why his piano is one of the leading light of Pacific Northwest jazz, Seales makes one of those last word statements that speaks loudly. Check it out. ...

Improvijazzation (Dick Metcalf)
When your favorite tunes are those like “Pusherman“, you’ll find long hours of listening ahead in Marc’s excellent keyboards on this great release! He’s joined by guitarist Fred Hamilton, bassist Jeff Johnson, with Dave Captein on electric bass & Gary Hobbs on drums & they can COOK it! The other great thing about the recording is that i ...

Ancient Victorys (Chris Lunn)
Seales, from our 1970's jazz sessions at the Other Side of the Tracks, continues with the third in a series of jazz music interpretations. Fred Hamilton is on guitar, the amazing bass of Jeff Johnson or the electric bass of Dave Captein, and drums by Gary Hobbs. Seales has taken Americana or created his own songs from blues, funk, highway, and cou ...

Jazz Society of Oregon (Tree Palmedo)
Pianist Marc Seales has been a Northwest mainstay for years, and his American Songs series has been a consistently entertaining look at jazz and blues history. On the third volume in the series, Seales digs into the funkier side of things, both with his song choice and his band's electrified sound. The album kicks off with Curtis Mayfield's "Pus ...