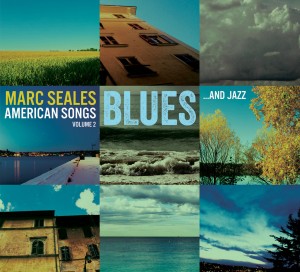 Whether performing with the heaviest jazz luminaries or with his own bands, pianist Marc Seales' deeply lyrical and blues-based approach to modern jazz has defined the sound of Seattle's dynamic jazz scene for several decades. For his fourth recording, Seales brings together his longtime compatriots--guitarist Fred Hamilton, drummer Gary Hobbs, and bassists, Jeff Johnson and Dave Captein--for a set of original blues compositions and reworked jazz standards such as "Giant Steps" and "ESP." Included also is a new version of Seales' "Highway Blues." Originally recorded by his group New Stories with Ernie Watts, it's known to many for its use as a music file in Windows XP, and has been one of the most listened to jazz performances in the digital world.

Midwest Record (Chris Spector)
Talk about being in the right place at the right time! Why do you know the opening track on this set by the long time mainstay of Seattle jazz? Because it's a music file in Windows XP making it one of the most listened to pieces of jazz this side of Vince Guaraldi's Charlie Brown themes. With more meat on it's bones than Eno's ta da wave, he k ...

Jazz Weekly (George W. Harris)
Pianist/keyboardist Marc Seales mixes jazz with its blues root on this cookin' session with Fred Hamilton/g, Jeff Johnson/b, Dave Captein/eb and Gary Hobbs/dr. The band cruises like a Ford V8 on the waltzing "Highway Blues" and the gentle "The Open Road" which both spotlight some clean and fresh work by Hamilton's fretwork. Seales' piano is ...

Ancient Victorys (Chris Lunn)
Seales was one of a host of diverse and often extraordinary keyboard players in the late 70s jazz programs I was honored to book, host, and run for Victory, that included Al Hood, Barney McClure, Jorgen Cruise, Randy Halberstadt, Joni Metcalf, Nick Allison, and many more. Seales' command of the piano stopped you with his deep understanding of blue ...