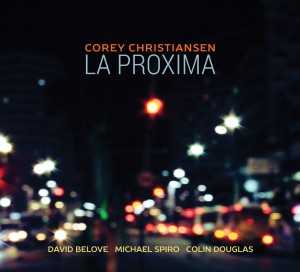 With his collection of recordings over the last decade, guitarist Corey Christiansen reflected heavily on the great vistas of his Utah home, the West, and traditional melodies, while still fully imbuing his music with a modern jazz aesthetic. With that same penchant for exploring 'roots,' Christiansen's 6th Origin release borrows inspiration from the music that influenced him from Africa, through Cuba and into the States. While not an Afro-Cuban album per se, the more specifically explored rhythms & grooves that have always informed his playing, and that of his bandmates here - bassist David Belove, drummer Colin Douglas, and percussionist/co-producer Michael Spiro - add new layers of perspective, dance and feel.

All music by Corey Christiansen | BMI

Midwest Record (Chris Spector)
Leaving behind the west that has inspired him on past releases, Christiansen digs into his Afro Cuban inspirations for a painting from a different palette. Not a traditional Afro Cuban outing, but for a cat that spends a bunch of the year in Indiana, we'll grant him his askance and enjoy the ride as well. A fun guitar jazz tour de force that take ...

All About Jazz (Dan McClenaghan)
Guitarist Corey Christiansen's early days recording for Seattle's Origin Records featured a pair of superb organ jazz recordings, Roll with it (2008) and Outlaw Tractor (2010). A versatile player, the guitarist expanded his vision with his "American West" set Lone Prairie (Origin Records, 2013), in addition to his "avant cowboy/surf rock band" on F ...

Jazz Halo (Belgium) (Georges Tonla Briquet)
On his latest CD 'La Proxima' the American guitarist Corey Christiansen links a modern sharp sound to Cuban polyrhythmics. By delving into various grooves and rhythms, he inevitably ended up with African roots and traditions. Hence towards Cuba is another logical step. Christiansen himself admits that he had not pretended to make an Afro-Cuban r ...

Jazz Weekly (George W Harris)
Corey Christiansen plays electric and acoustic guitars in a collection of optimistic settings with a team of David Beove/b, Michael Spiro/perc and Colin Douglas/dr-perc. The extra rhythm pays dividends, whether on the acoustic guitared "My Sofiea" or electrical "Ambedo," the grooves are dug deep. Electric bass and guitar get fusiony on the Latin "M ...

Jazz Journal (London) (Elliot Marlow-Stevens )
In the album notes of La Proxima, guitarist Corey Christiansen writes that his primary influence for this album was a desire to further explore African- and Cuban-inspired rhythm and groove. Christiansen was helped in this project by percussionist Michael Spiro, a fellow teacher at Indiana University's Jacobs School of Music, and bassist David Belo ...