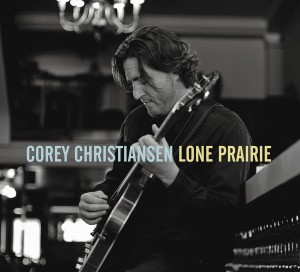 * only included on the CD/iTunes version

Midwest Record (Chris Spector)
A cowboy spirited album from a Wes influenced jazz guitarist? Well, he is from Utah and he didn't go down Chris Parkening's road so when genes will out, it was bound to happen. Does it feel out of character? Nah. Hell, if you didn't already know "Streets of Laredo" was a cowboy song, this would sound like some introspective meditation. A solid ...

Jazz Guitar Society of Western Australia (Ian MacGregor)
On this, his latest CD, Corey Christiansen interprets in a thoroughly modern jazz way, some of the old cowboy songs and melodies of the frontier.Tunes like "Streets of Laredo;" "Red River Valley" and "Sittin' on Top of the World" will be quite familiar to many of us and the latter title really swings. The other tunes which may not be as fami ...

LongPlay: RadioJAZZ - Poland (Robert Ratajczak)
[translated from Polish] Lone Prairie is the fifth album by Corey Christiansen in recent years (third released by the American label Origin Records), successfully strengthening his position among the greatest jazz guitarists in the world. After a stunning debut in 2004 (The Awakening), an album he recorded with trio MB3 (Hits Jazz Vol.1), and two a ...

The Jazz Word (John Barron)
Guitarist Corey Christiansen explores the rich melodic legacy of traditional American cowboy tunes, with a few of his originals, on Lone Prairie. Although Christiansen has an acclaimed past as a straight-ahead jazz guitarist and educator, he really is a stylistic chameleon with a blues-based foundation, authentic in a variety of settings. His use o ...

KIOS Radio - Omaha (Chris Cooke)
Jazz CD of the Month. In the last ten years a number of jazz artists have released recordings that attempt to fuse jazz and country music; these efforts have yielded results of varying success. Guitarist Corey Christiansen's latest effort is without doubt an exception. Lone Prairie captures the mood of classic country and puts into a jazz context ...

All About Jazz (C. Michael Bailey)
Guitarist Corey Christiansen has released two previous recordings on the Origin label in Roll With It (2008) and Outlaw Tractor (2010). Both were well received and featured Christiansen's ethereal playing, characterized by a deep reverb beneath a slightly overdriven tone. These recordings are uniformly fine, but generally lacked a thematic center ...

Jazz Society of Oregon (Deborah DeMoss Smith)
This album may be a little different, but the fun of jazz is giving an ear to something that's not on the usual path. With tunes focused on the intense electric guitar and two keyboards, as well as the bass, drums and percussion, guitarist Corey Christiansen's Lone Prairie is indeed a bit off the path, yet still on the prairie. A tribute to th ...

Louisville Music News (Martin Z. Kasdan Jr.)
Guitarist Corey Christiansen shines on his new album, which includes new renditions of the title track, "El Paso," and others from the folk/country canon, as well as three originals and Ennio Morricone's "Il Grande Massacro." Joined by pianist Steve Allee and others, Christiansen seems to meld influences from Pat Metheny and Bill Frisell into ...

Bird is the Worm (Dave Sumner)
The modern jazz scene in the Pacific Northwest has never been bashful about displaying its ties to Miles Davis's fusion period, especially the influence of rainy day ambiance from In a Silent Way. And though the influence of Cuong Vu, Bill Frisell, and John Stowell are also apparent, the relaxed jazz-rock fusion of Miles Davis's 70s period shine ...