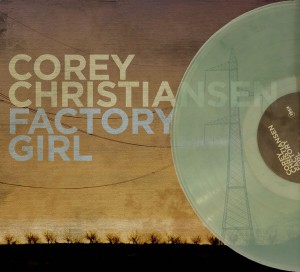 After many years of crafting the music he loves in various genres, guitarist Corey Christiansen has found a home with the unique combination of jazz and traditional American music he's explored in his last several recordings. On Factory Girl, Corey has singled out the feminine side of American frontier music and remodeled simple tunes into rhythmic and harmonically subtle contemporary arrangements. As guitar great Andy Summers states in his liner notes: "Corey is at the frontier of American jazz guitar. In addition to a gorgeous jazz tone, he also employs edgy blues tones and biting slide guitar that would make Duane Allman sit up. Even on these antique pieces, Corey plays inside and outside of the harmonic structures with a natural and gifted ease. Maybe he has created a new genre here. Avant Folk, maybe? Whatever it is, this is a great album with stellar playing all round and a great pleasure for guitar fans."

Click here to see the CD version of Factory Girl.

All About Jazz (Dan McClenaghan)
Guitarist Corey Christiansen began his stint at Origin Records in 2008 with a top notch organ jazz outing, Roll With It. He followed that with an equally engaging disc featuring the same players, Outlaw Tractor on the label in 2010. On these two dates, Christensen and his superb band worked the soul jazz groove typical of the B3 organ genre, featur ...

Midwest Review (Chris Spector)
Christiansen continues to carry his folk jazz guitar into Americana realms with an experimental edge, this time around drawing out praise from Andy Summers who thinks Christiansen is now kicking Duane Allman's ass, where ever it might be. Refashioning a boatload of traditional tunes told from the female Americana perspective, it's like they say, i ...

Improvijazzation (Rotcod Zzaj)
If what your ears are thirsting for is some great jazz/Americana/bluesy jazz, Corey's guitar work will sit just right with you for that. He's actually released several previous albums, & though this is my first listen, I'm sure you'll be hearing much more from this talented player. Tunes like the 7:17 opener, "She's Gone", give yu plenty of time ...

WTJU (Dave Rogers)
Guitarist Corey Christiansen continues an exploration of "jazz-ifying" folk and related songs from the past that he began on his previous disc. He and his group – Zach Lapidus (keys, SuperCollider), Jeremy Allen (bass), Matt Jorgesen (drums) and Michael Spiro (percussion) - tackle a variety of songs from "Cluck Ol' Hen" and "Shenandoah" to "Facto ...

Jazz Weekly (George W. Harris)
Guitarist Corey Christiansen gets rockin' with Zach Lapidus/key, Jeremy Allen/b, Matt Jorgensen/dr and Michael Spiro/perc on this mix of new and traditional Americana. The team flows on a relaxed and bluesy "Shenandoah" with graceful strums on the strings, while Christiansen picks and grins on "John Hardy" the team boogie's on "Old Joe Clark" and s ...

JAZZIZ ()
While it's not exactly a new concept, jazz artists have been increasingly mining traditional blues and Americana for raw material. Following his 2013 release Lone Prairie, guitarist Corey Christiansen returns to this fertile soil for Factory Girl (Origin), updating songs that set the template for modern American pop and rock, as well as contributi ...

JazzTimes (Mike Joyce)
No need to search long and hard here for a telling stylistic connection. When guitarist Corey Christiansen punctuates Factory Girl with a thoroughly modern and haunting arrangement of the folk song "Shenandoah," fans of Bill Frisell's intriguing brand of Americana will likely find themselves reaching for the "repeat" button. Frisell has long favore ...