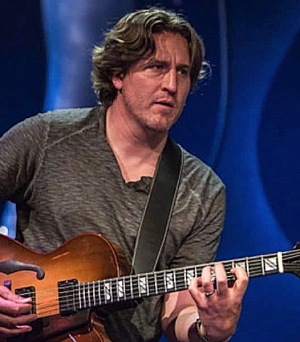 From the first note, Corey Christiansen lights a rhythmic fire that never flickers, punctuating chords with precision and soloing with zeal on this set of inventive originals and standards.
Dave Zaworski / Downbeat Magazine

Corey Christiansen grew up in a musical family. His father, Mike Christiansen, has run the guitar program at Utah State University for over three decades. Corey spent a lot of his youth with his dad on campus learning about the guitar and music. After high school, Corey received his bachelor's degree from USU. A year later Corey left for Tampa Florida to study with legendary jazz guitar educator, Jack Petersen. In 1999, Corey received his master's degree from the University of South Florida and took over the teaching duties of Jack Petersen the next year.

From 2000 to 2007 Corey was the senior editor and main guitar clinician for Mel Bay Publications. This job allowed him to tour, give clinics, develop products, produce recordings and rub shoulders with the best musicians in the business. For seven years Corey gave countless clinics and performances around the world and developed a fan base not only for his teaching but his playing. Corey's debut recordings for Mel Bay Records - Awakening and MB3: Jazz Hits vol. 1 - received critical acclaim and found large success on North American radio, proving his ability to maintain artistic integrity while pulling in listeners.

In 2007 Corey moved back to his native Utah and was the Director of Curriculum for The Music School, a privately funded music program outside of Salt Lake City. He also signed with Origin Records to release a string of albums over the next decade. Laden with hooks and grooves, his music draws on the tradition of the masters but leans towards the future. Rooted in the tradition of the jazz language but just bluesy and gritty enough to not alienate larger audiences. Roll With It was Corey's debut release for Origin, featuring Matt Jorgensen on drums, Pat Bianchi on organ and David Halliday on sax, and since then he's released 5 more acclaimed recordings, further establishing his musical voice internationally.

In the fall of 2008, Corey joined the faculty of Utah State University, while spending time every month at Indiana University where he pioneered the jazz guitar program. Even with his busy academic schedule, Corey continues touring and recording.

Corey Christiansen has a number of publications with Mel Bay and has conducted countless guitar clinics and concerts across the country and beyond including Europe, South Africa and Australia. He has also performed at many notable festivals and venues including John Pisano's Guitar Night in Los Angeles, the Smithsonian Institution in Washington, D.C., the Umbria Jazz Festival in Perugia, Italy, the Lionel Hampton Jazz Festival, the Clearwater Jazz Festival, the Daytona Beach Jazz Festival, the Classic American Guitar Show, and the St. Louis Jazz Festival. He has also performed and/or recorded with many outstanding jazz artists including Jimmy Bruno, John Pisano, James Moody, Joe Negri, Willie Akins, Chuck Redd, Sid Jacobs, Jack Wilkins, Christian McBride, George Duke, Terri Lyne Carrington, Danny Gottlieb, and many, many others.