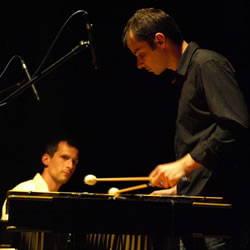 When it comes to intensity and quality of performance, AsGuests can compete with any group in the world.
-Koen Schouten, Amsterdam

AsGuests has been, since its founding in 1997, a collaboration project between vibraphonist Miro Herak and pianist Michal Vanoucek. They met during their classical music studies at the conservatory in Bratislava, Slovakia while preparing a concert for the final exam of Miro Herak. It was there, that they, for the first time, presented their musical ideas in their own compositions in duo as well as in a quartet.

A resounding success, they decided to continue the concept of collaborating with different musicians. These musicians play for one or more projects, working with them as guests, which is also where the name originates. This allowed them not only to change the instrumentation, but also bring together people with different backgrounds. In the period up to 1999, the members of AsGuests included many top artists on the Slovak music scene : Radovan Tariska-alto saxophone, Milo Suchomel-tenor saxophone, Marian Masik-trombone, Juraj Kalasz-bass, Robert Vizvary-electric bass, Peter Solarik-drums, Juraj Bilcik-percussions.

After relocating to the Netherlands, they both studied in the jazz department of the Royal Conservatory in the Hague, where they finished their Bachelors in 2004 and their Masters in 2006. While studying, they formed a quartet with bassist Janos Bruneel and drummer Joao Lobo. This was the start of ongoing collaborations in Holland. After almost a year of the group playing together in this format, AsGuests won the 2004 Pim Jacobs Muziek Prijs and The Dutch Jazz Competition, hosted annually by the North Sea Jazz Festival. 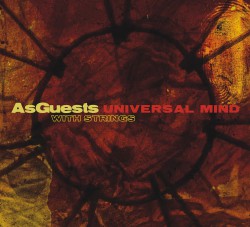