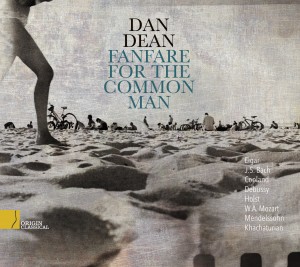 ...music-making of the highest order, which plumbs the depths of all of the emotions from wonderful joys to abject lamentations.
Raul da Gama

One has come to expect the unexpected from multi-talented artist Dan Dean. In the midst of a successful forty year career as a bassist, composer, producer and recording engineer, Dean has in recent years delved into classical vocal works. What began as a project for electric bass and orchestra, 2017's "Songs Without Words" evolved into a multi-layered, highly ambitious choral work, with Dean himself supplying vocals on arrangements of pieces by Bach, Rimsky-Korsakov and Mussorgsky. Shortly after its release, he began arranging more classics that inspired him and returned to the studio for this second volume. The result is Fanfare For the Common Man, featuring much loved works by Mozart, Mendelssohn, Elgar, and Debussy. From Bach's Baroque masterpiece, "Brandenburg Concerto #3 in G Major," to Holst's broadly cinematic "Mars: The Bringer of War," Dean masterfully arranges and sings all the parts of timeless classical orchestrations expressed through the resonance of his own voice. Both admirably and remarkably, he achieves the tonal character of the strings, woodwinds, brass and percussion, in terms of amplitude, spectral sound and emotive objective.

Reviews of Fanfare for the Common Man

Textura (Ron Schepper)
Having distinguished himself in a career spanning decades as a bassist, composer, producer, and recording engineer, Dan Dean turned his attention four years ago to the creation of classical pieces using purely vocal means. The artistic success of Songs Without Words encouraged him to fashion a successor, which brings us to the glorious Fanfare for ...

All About Jazz (Dan McClenaghan)
BEST OF 2021 Dan Dean is well known for his bass playing and producing for Origin Records. He is also an accomplished—a recent development— vocalist. With Fanfare For the Common Man he has convened a choir of heavenly voices—all his own, via a painstaking overdub process— and made one of the most beautiful sets of music this year. It is a ...

WICN, Worcester (Marty Friedman)
So after a forty year career as bassist, composer, producer and recording engineer, what do you do next? Why, you sing the parts to famous orchestral pieces, overdubbing to create alternative chorale-based works - of course! We have two new CDs from Dan Dean, with a track from each during this show. In the first hour you'll hear a track from ...