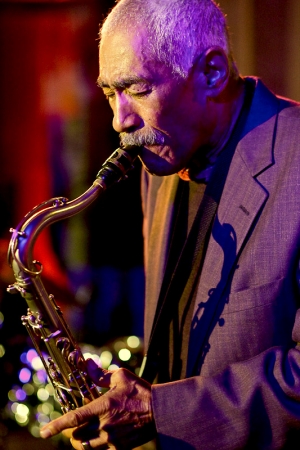 He combines knowledge and creativity, as well as soul and swing.
Jim Wilke, Jazz After Hours

You don't have to be a jazz fan to realize within a few seconds the great talent of Hadley Caliman, who brought musical joy as a tenor saxophonist. A review of one of his albums called him "an unsung maverick of modern jazz."

He loved his music so much that, even as his condition weakened, Mr. Caliman was playing gigs this summer in the Seattle area. At a mid-July tribute to him at Jazz Alley here, "He was slow moving on and off the stage, but when the music started, the rhythm started, he was totally focused on the music," remembered Jim Wilke, host of the syndicated radio show "Jazz After Hours" and one of Mr. Caliman's many fans.

Mr. Caliman would not have found jazz if not for his dad.

He was born Jan. 12, 1932, in Idabel, Okla. His father, Hadley Sr., was white, and his mother, LeeElla, was black. The interracial marriage met with disapproval in that Dust Bowl area during the Great Depression. "Hadley's grandfather on his father's side had the marriage annulled at some point, and so Hadley stayed on the farm with his mom, and his father moved to L.A.," said Linda Caliman, Mr. Caliman's wife. She said the father worked as a railroad cook and wrote letters to his son and sent gifts. "Then, it was probably 1940, one day in Oklahoma this huge car drove up," said Linda Caliman. It was Mr. Caliman's father, who took the young boy with him to Los Angeles.

"When he was little, the dad would take him to all the shows that came through, big bands like Duke Ellington," said Linda Caliman. "At one of those shows, I think it was a Johnny Griffin (the saxophonist, and four years older than Mr. Caliman), was playing, and Hadley thought to himself, 'I can do what this kid is doing.' He told his dad he wanted a horn. He never put it down."

Mr. Caliman attended Jefferson High in Los Angeles. One of his classmates was jazz great Art Farmer, and Mr. Caliman studied under legendary saxophonist Dexter Gordon. Mr. Caliman was known as "Little Dex." Mr. Caliman became part of the Central Avenue jazz scene in Los Angeles in the 1950s. That scene included heroin. "He said all the musicians did it, that everybody wanted to sound like Charlie Parker, and Charlie Parker was the biggest drug user of all," remembered his wife. She said Mr. Caliman was busted for drugs two or three times, and he served about four years in various prisons. In an interview earlier this year with allaboutjazz.com, Mr. Caliman remembered, "I played and shot drugs with some who survived and some who didn't ... The fact that I'm still here is miraculous. Logically, I should not have this chance."

Still, Mr. Caliman had an astoundingly productive life in music. Among the musicians with whom Mr. Caliman performed, recorded and toured were Freddie Hubbard, Carlos Santana, Mongo Santamaria, the Grateful Dead, Joe Henderson and Nancy Wilson. But he also didn't release any new albums for about three decades, not until 2008, after being diagnosed with cancer. He released three albums in the past two years.

About the quiet decades, "I think he was going through a very introspective period, trying to decide whether he wanted to be a performer. It's something that a lot of artists and jazz musicians have to face. It's a very difficult way to make a living," said Michael Brockman, a professor of music at University of Washington and co-director of Seattle Repertory Jazz Orchestra. Mr. Caliman performed regularly with the orchestra, as well as with his own group.

Mr. Caliman found steady employment on the jazz faculty of Seattle's Cornish College of the Arts. He taught there for two decades, retiring in 2003. During most of the time he taught at Cornish, Mr. Caliman commuted from the little town of Cathlamet by the Columbia River. He had ended up there because the parents of his third wife, Jan Caliman, lived there, and she was pregnant with their son, Roger. The couple had moved there temporarily, but Mr. Caliman liked the area. He told allaboutjazz.com, "Laid-back folks. People would wave at you and stuff. I was the only black person in town, but I never had one racial problem there."

Mr. Caliman was married four times. Linda Caliman said he stayed on good terms with all his former spouses, and that, even after divorce, they retained his last name. By the time of his fourth marriage, Mr. Caliman was living in Seattle.

Mr. Caliman was loved in the Seattle jazz scene, and former students and fellow jazz people posted their remembrances. One memory that Randy Halberstadt, a professor at Cornish and a jazz pianist, had of Mr. Caliman was seeing him late one rainy December night many years ago, in the parking lot of the school, slumping and devastated. When asked what was wrong, Mr. Caliman replied he had just gotten a new horn, and, "I've been up there playing on it for the last two hours solid, and I just ... I can't get the sound. I can't ... get ... the SOUND."

It was the music that mattered, always.