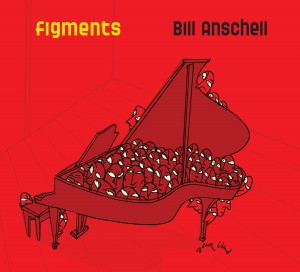 Throughout Figments, pianist Bill Anschell?s creative, abstract approach takes each song to unexpected places without ever leaving his audience behind. Self-recorded over a series of late nights, after gigs, when Anschell?s "internal supervisor had clocked out." The result is twelve genre-bending, near stream-of-consciousness takes covering a mix of jazz standards and pop songs from the 60s and 70s. Highlights include Arlo Guthrie?s protest song "Alice?s Restaurant," a meditative take on the Rodgers and Hart standard "It Never Entered My Mind," and a prepared-piano version of Joni Mitchell?s "Big Yellow Taxi."

All About Jazz.com (C. Michael Bailey)
Bill Anschell is a lot of things. He is house pianist and mainstay at Origin Arts, showing up on a wide range of projects. He also contributes to this publication, writing with grace on craft of jazz. But, late at night, he is a musical James Joyce, spinning musical thread off the top of his head. And so he does on Figments. Recorded over a seri ...

The Jazz Line (Will Schoell)
Bill Anschell recorded his newest album ?Figments' by himself, mostly late at night after gigs. The beauty of a solo piano album is its ability to be free as it lacks any constraints that might be inherent while playing with a group. Anschell, an established composer, uses the freedom of solo piano to explore some of his favorite songs by other co ...

All About Jazz (Dan McClenaghan)
Pianist Bill Anschell normally involves himself in projects that shine with a high polish, recordings like the Wellstone Conspiracy's collaborative Motives (Origin, 2010) and his own More to the Ear than Meets the Eye (Origin, 2006), or in the sideman slot on the marvelous Reunion, led by saxophonists Pete Christlieb and Hadley Caliman. In addition ...

Jazz Society of Oregon (George Fendel)
It's true, you can go wherever you wish with a mind-boggling 88 keys when you're going it alone. And so it is that Anschell takes us on an intriguing journey of creativity on this solo album. He begins the proceedings with a very different take on "My Heart Belongs to Daddy." I'd think that Cole Porter would have dug it! Next comes Cahn-Van Heusen' ...

Jazz Scan (Ric Bang)
Although I've reviewed numerous albums by ? or featuring ? pianist Bill Anschell, each always involves a bit of fear. Aside from being an outstanding musician, Anschell is an excellent writer and humorist; I know that whatever I say, he would have said better (and funnier). That said, here goes... Anschell is a Seattle, Washington, native who le ...

JazzTimes (Thomas Conrad)
Bill Evans' 'Alone' is the default paradigm for introspective solo piano recordings. Evans was actually in Webster Hall in New York (capacity 2,500) when he recorded it, but he sounds exceedingly lonely. Bill Anschell recorded 'Figments' himself, after gigs, alone in his home late at night. Anschell does not sound like Evans, but the deep, rapt ...

All Music Guide (Adam Greenberg)
One of the more prolific exponents of the Northwest jazz sound, pianist Bill Anschell has figured in any number of excellent recordings, both as a bandleader and as an accompanist. In Figments, he takes a turn at solo piano, running through songs from pop, jazz, and the American songbook and reworking them into wandering (he describes it as stream ...

Cadence (Larry Hollis)
Another name that shows up quite regularly on the Origin/OA2 rosters is Bil Anschell, a pianist surely worthy of wider exposure. As both leader and sideman he has racked up an impressive cache of credentials, playing in varied configurations from duets to larger settings, but 'Figments' is his debut in a solo piano setting. Captured on the most b ...

Outside-Inside-Out (Chris Robinson)
Pianist Bill Anschell's latest CD, Figments, is his first solo recording, and I've included it on my Best of 2011 list. It's a wonderfully introspective, beautiful, and at times haunting album that he recorded late at night in his home studio. Below is a lengthy conversation we had recently over email in which we talked about his new album, the c ...