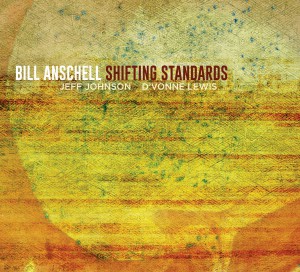 Bill Anschell would be a badass wherever he lived, even Greenwich Village. He is an impeccable, distinctive pianist with a valuable body of work on Seattle's Origin label.
JazzTimes

Pianist/composer Bill Anschell's recordings are often filled with his unique and vibrant original compositions or surprising, liberated arrangements of jazz & pop classics. For Shifting Standards, Anschell depends on the uncanny shared intuition that's been developed over ten years with his trio-mates, bassist Jeff Johnson and drummer D'Vonne Lewis. Well-loved standards from jazz and Great American Songbook composers unfold, capturing the trio's live chemistry and spontaneity on material ranging from Dizzy Gillespie's "Con Alma" and "A Night in Tunisia" to Leonard Bernstein's under-recorded gem, "Some Other Time."

All About Jazz (Paul Rauch)
Seattle based pianist Bill Anschell has created a tremendous body of work over the the past 30 years, as a composer, musical director, and pianist. He returned to Seattle in 2002 after 25 years abroad and formed a relationship with Origin Records, releasing more than a dozen records both as a leader and co-leader. Whether composing and performing o ...

Cadence (Robert Rusch)
BILL ANSCHELL, plays 9 standards [61:25] which could be boring but Anschell brings to them a nuance beyond the theme that may or may not play off the changes. Jeff Johnson [b] and D'Vonne Lewis fill out the trio. I'm not sure how old Anschell is, he has been around jazz for about 25 years, but his fullness reminds me of pianists active from the 19 ...

Festival Peak (Carol Banks Weber)
I'm a Bill Evans type of listener. For me, a musician's touch says more than a fantastic cavalcade of impressive, overly complicated notes, impossibly juxtaposed against a harried orchestra of one. If you can make me feel down to my bones, you've got me. Seattle's beloved jazz pianist Bill Anschell is cool, because he can do both: move and impre ...

Jazz Weekly (George W Harris)
Veteran pianist Bill Anschell joins together with Jeff Johnson/b and D'Vonne Lewis/dr for some original readings of jazz standards. A slower than expected "A Night In Tunsia" has Anschell probing deeply while he plays hide and seek with Johnson on "Cheek to Cheek." Lewis' cymbal dances on a bluesy and chiming "Jitterbug Waltz" while the team pain ...

Earshot (Ian Guin)
Jazz musicians are mathematicians, carpenters, athletes. With absurd devotion they hone their minds and muscles in ceaseless work, just so that at the end of the ledger the balance reaches zero, so every corner dovetails into a standing cabinet, so the javelin might reach a few inches further. If you need an answer to why jazz musicians work so har ...

Stereophile (Thomas Conrad)
4 1/2 STARS All jazz fans love horns. It is therefore paradoxical that, if told they could keep only one ensemble format in their record collections, many would hoard their piano trio albums. There is a special magic to a superlative piano trio, a unique purity and balance. No wonder it is called the minimum complete jazz orchestra. There is a ...