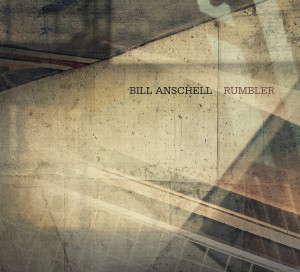 Magical...No matter where Anschell plays on the keyboard, he sounds like no other pianist.
JazzTimes

After a decade of recording mostly unscripted, improvised albums focused on his deep musical relationships with a few key players, pianist Bill Anschell returns to recording his own compositions and arrangements on "Rumbler," his fifteenth as a leader or co-leader. Anschell penned eight of the eleven tracks as well as arrangements of Thelonious Monk's "Misterioso" and Paul McCartney's "For No One." Mostly written on the road in planes and hotel rooms, "Rumbler" doubles as a musical travelogue, especially vivid in its reflection of experiences from his touring in South America over the last several years. Anschell is joined by a stellar cast of Seattle musicians, plus a guest appearance by Nashville saxophonist Jeff Coffin on the title track.The album closes with a moving, fully improvised solo expression of Duke Ellington's under-recorded "Reflections in D."

All About Jazz (Paul Rauch)
Seattle's eclectic jazz scene has produced a long line of significant voices that have impacted the music on a national and international level. Bill Anschell, as a pianist and composer certainly falls into that category that has produced the likes of Ray Charles, Quincy Jones, Ernestine Anderson, and presently, trumpeter Thomas Marriott. His new ...

WTJU - Richmond, VA (Dave Rogers )
Pianist Bill Anschell pulled together a great band to support his eight originals and covers of Monk's "Misterioso", Lennon & McCartney's "For No One" and Ellington's "Reflections In D". The group is absolutely simpatico with the leader in creating this remarkable melodic percussive union. The band members include Chris Symer (bass), Jose Martinez ...

Notes On Jazz (Ralph Miriello)
The pianist Bill Anschell was surprisingly self-taught, he subsequently studied at Oberlin College and Wesleyan under some influential teachers. After receiving his master's degree he came to Atlanta in 1989 as the jazz coordinator for the Southern Arts Federation. He eventually formed an internationally syndicated radio show "Jazz South" and beca ...

Amazon (Dr. Debra Jan Bibel)
With this, his ninth album as leader, pianist Bill Anschell returns this time with a fuller ensemble and emphasis on original tunes and arrangements. Headquartered in Seattle and environs, he brings a relaxed, melodic approach but does not shy away from hot inventions. The three covers are Monk's Misterioso, Lennon & McCarty's For No One, and Ell ...

Earshot Jazz (Andrew Luthringer)
There's an exhilarating moment on pianist and composer Bill Anschell's superb new album Rumbler that is emblematic of the album's strengths, and it's right at the top of the first track. The disc kicks off with piano and saxophone outlining Thelonious Monk's iconic "Misterioso." Sure, it's a great composition, but with all the masterful versions al ...

JazzTimes (Thomas Conrad)
Jazz has always been rife with rumors about great players hidden in backwater towns. Seattle, Wash., is no vantage point of New York City, where jazz reputations are made and lost. From New York, Seattle is somewhere on the left edge of the Earth―perhaps near Siberia. Bill Anschell would be a badass wherever he lived, even Greenwich Vi ...

KUCI - Irvine, CA (Hobart Taylor)
Bill Anschell is a pianist arranger who provides here that subtle miracle of jazz performance, making an elephant walk on stilts. Deep in tone and soul his tunes and a couple of covers, (most notably Monk's "Misterioso" with a super performance from Seattle's Richard Cole on sax),have solidity and assuredness, and yet seem casual and airy at the sa ...

Downbeat (Carlo Wolff)
**** Ambivalence and shadowplay suffuse this intriguing album by Seattle-based piano guru Anschell. Jeff Coffin's querulous soprano saxophone launches the medium-tempo title track, one of the most conversational on this engaging CD. The soloists vary, but the qualities of surprise and confidence always figure here. In addition to originals spannin ...

Cadence (Robert Rusch)
Because it opened with one of Monk's finest compositions; "Misterioso", I spent a good deal of time with BILL ANSCHELL's RUMBLER [Origin Records 82728]. Anschell not only offers up a fine arrangement here but he takes the composition head on and goes through various tempos, at one point turning it into a straight blues. Brian Monroney contributes s ...