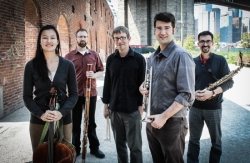 Douglas Detrick, 27, is a composer and trumpet player who resides in the Bronx, NY and was raised in Portland, Oregon. Equally at home as a performer and a composer, he is a versatile and eclectic musician establishing his reputation as an innovative composer and performer who creates unique music in the worlds of jazz, chamber music, electronic music and improvised music. The chamber-jazz quintet Douglas Detrick's AnyWhen Ensemble will be appearing with Wayne Horvitz at the "Is That Jazz Festival" in Seattle, WA in January of 2011 and releasing their second album, Rivers Music on the Origin Classical label.

Beta Collide, a leading new music ensemble led by trumpeter Brian McWhorter, of the Meridian Arts Ensemble and Grammy winning flutist Molly Barth, formerly of Eight Blackbird, commissioned and gave the world premiere of Detrick's composition "Ecology" for flute, trumpet, piano and double bass at the University of Oregon's Music Today Festival in February of 2009. Detrick received an honorable mention in the ASCAP Young Jazz Composer Awards in 2009 for his composition "Cape Creek" for his chamber-jazz ensemble Douglas Detrick's AnyWhen Ensemble. Detrick was a winner of a 2007 Downbeat Student Music Award for his arrangement of Duke Ellington's "Single Petal of A Rose". This piece was premiered by the Lawrence University Symphony Orchestra and Jazz Ensemble and received its public premiere with the Wenatchee Valley Symphony of Wenatchee, WA. Douglas was the winner of the Meridian Arts Ensemble's first Composition Contest in 2007. The Meridian Arts Ensemble premiered Douglas' brass quintet, "As the Crow Flies" in a recital at the Manhattan School of Music in September of 2007 and performed the piece in Bulgaria and Mexico.

Detrick holds a Master's of Music from the University of Oregon, where he served two years as a graduate teaching fellow. He also holds a Bachelor's of Music degree in trumpet performance with jazz emphasis from Lawrence University of Appleton, WI. He currently resides in Bronx, NY where he works as a freelance composer, performer, educator, copyist and transcriber. Douglas currently leads the Douglas Detrick Trio, a jazz group focusing on traditional blues and country music, and the AnyWhen Ensemble, a chamber jazz/new music/improvisation ensemble and co-led the Eugene Jazz Composer's Orchestra, a big band that performs music by Detrick, David Swigart and Justin Morell.

Detrick released two recordings in 2009. The first, "Walking Across" by his chamber jazz ensemble Douglas Detrick's AnyWhen Ensemble, is a collection of original compositions that feature improvisation and composition weaved together into an engaging new music that lies somewhere between new music and jazz. The AnyWhen Ensemble, in addition to its debut recording on 8Bells Records, completed a successful west coast tour, including a performance in Seattle featuring composer-pianist Wayne Horvitz playing with the group on compositions by Detrick and Horvitz. Detrick also released "The Turning Point" with his jazz quintet the Douglas Detrick Quintet. The album expands on and honors the jazz tradition with an emphasis on the possibilities of integrating composition with improvisation.