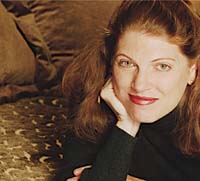 There's surely only one red-headed, patent-holding, engineer-pianist-trumpeter-bassist woman in town.

Her name is Laura Welland, and if you've listened to jazz in Seattle in the last decade, you may have heard her playing bass at Tula's, the Seattle Art Museum, or Benaroya Hall. She's played with Jay Thomas, Hadley Caliman, Julian Priester, Dawn Clement and other Seattle jazz greats; she's studied under Chuck Deardorf, John Clayton and the late Ray Brown; on the side, received her music degree from Cornish College of the Arts. Her musical pals have praised her swinging time, facile sight-reading, and simpatico stage presence. She's achieved the requisite honors, too, such as runner-up bass at the international "Sisters in Jazz" competition.

But something else needed to be said, or rather, sung. At an instrumental recording session, she sang a tune. Fast forward: Laura has a new vocal CD coming out in late 2003, produced by mentor John Clayton (also on bass), along with Joe LaBarbera (drums), Bill Mays and Larry Fuller (both on piano).

Laura absorbed the proper reverence for music as a three-year-old, as she watched her father tenderly bathing - yes, bathing - his hundreds of big-band LPs, lest a fleck of dust mar their sound. In the Welland household, reversing stereotype, the kids had to beg their parents, "Please, turn that music down!" Laura was marinated in the music of Frank Sinatra, Duke Ellington, Glenn Miller, and Ella Fitzgerald from morning til night. At her senior recital at Cornish, Laura paid homage to her father by arranging the 70's rock and roll classic "Smoke on the Water" big band style, with full horns blazing. (Portions of her recital were later played on Jim Wilke's Jazz Northwest program on public radio.) She and her siblings studied classical piano and played much for pleasure; Broadway musicals were absorbed while doing housework and homework. But the music in the house ended abruptly, and on her own at a young age, Laura chose the stability of an engineering career. It served its purpose for a while, but the music inside her still needed to get out. She sold her own successful company and went full time with jazz in 1997.

As a singer, Laura Welland is an amalgam of all her experiences. She ascribes her perfect pitch to her parents' DNA; as Frank Sinatra said of Nat King Cole, that other Johnny-come-lately to vocalizing, Laura's vocal notes ring true. Her years as a trumpeter helped develop her diaphragm and breath control. As a bassist, she refined her timing and sense of swing. Listening to Ella all those years set the highbar for Laura's clear enunciation. But the intensity of her singing, her genuine way with lyrics come from Laura herself - her fruitful brain, her impassioned heart, and her personal interpretation of life.

Be careful, though: listening to Laura, you might decide to do something you always dreamed of doing. As she says, "it's never too late to follow your heart." 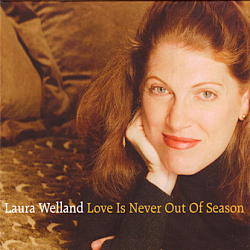 Laura Welland
Love Is Never Out Of Season
OA2 Records 22013