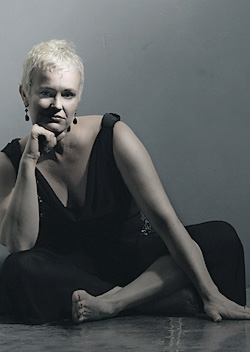 One of the things I love about jazz is that it moves forward with a clear sense of its own continuum. This rolling creation is deeply grounded in a rich heritage but not at all confined by it. Jazz looks ahead and back with equal joy.

With Harry's Fight, Katie King reasserts her stake in the flow. Always a hip and distinctive vocalist, King re-emerges here after a twelve-year hiatus - time spent living life and giving life - even more savvy and sage, her instrument graced with both polish and patina. King's bold, old-soul spirit defines this music with precision and soul, whether on thoughtful originals or re-imagined covers, affirming that both the singer and the song are completely and uniquely alive and well.

And Katie King can put a band together! One can hear on her three earlier recordings, and certainly here, a gift for creating exactly the right cohesion for the music while letting some top-flight musicians be exactly who they are.

On this session, Bill Anschell's gorgeous piano work and brilliant arrangements fit King's musical sensibilities like a kid glove. Anschell is no stranger to strong singers; his lengthy association with Nnenna Freelon brought him to concert stages around the world before he returned to live and work in Seattle.

Playing tenor sax throughout, the distinctive, even quirky, multi-reed player Craig Flory demonstrates his simpatico performing relationship with King with creative ease. The bassist Jeff Johnson, who has now appeared on three of King's four record dates, is always is solid, lyrical, and sensitive. Johnson is able to go anywhere in a split second and make it seem like the only possible place to be. D'vonne Lewis, one of the brightest young drummers to come out of the robust Seattle jazz scene in a long time, brings his trademark energy and propulsion to this recording along with a sophistication of business, particularly in his cymbal work, that draws the listener willingly inside the rhythms of Harry's Fight.

Decidedly more brash than bashful, King astutely selects the tunes for this outing. That is clearly part of her artistic gift. Her originals are deeply felt and soulfully delivered, with a subtle familiarity that makes us feel that we are already part of the family. The covers here include three tunes by the Beatles - always a challenge to interpret in the jazz context -- the last of which, "Here Comes the Sun," features King's piano playing on her own arrangement. She makes the other covers so completely her own that one imagines a partnership with Abbey Lincoln, Paul Simon, and Nina Simone. Same with the standards here; "Alone Together," "Inch Worm, and the traditional spiritual "Wayfaring Stranger," done as a duo with Johnson's bass.