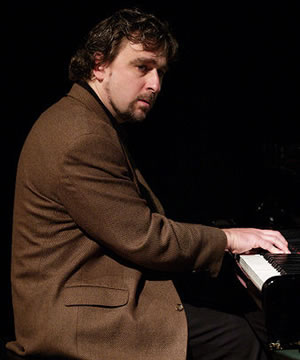 Stefan Karlsson, a native of Sweden, was born into a musical family. His father played piano professionally and inspired his interest in piano and jazz. He also began church organ lessons at 13 and continued to study the instrument into his college years. Following his graduation from high school, the pianist came to the United States on a scholarship to study at the University of North Texas, where he earned both a bachelor's and a master's degree. He was also a member of the university's acclaimed One O'Clock Lab Band for three years, touring nationally and internationally with the ensemble and participating in five of their recordings. Karlsson made his recording debut during a 1985 return trip to his homeland, appearing with Rich Matteson and Red Mitchell on their Four Leaf Clover CD Life's a Take. In 1990, Karlsson made his first date as a leader for Justice, following it with two more successful dates for the label, also appearing on three Justice CDs by drummer Sebastian Whittaker. He recorded a live CD for Vartran Jazz (joined by the late Bill Evans' former rhythm section, bassist Eddie Gomez and drummer Eliot Zigmund). Karlsson worked for several years in Denver and Las Vegas before returning to join the jazz studies faculty at his alma mater. In addition, Karlsson's music has been featured in a number of movies (including Sugar Hill and Twenty Bucks) and television series (including Melrose Place, Party of Five, Wings, and Homicide: Life on the Streets). Karlsson has continued to juggle his careers as a performer and educator, serving as an professor and clinician while working regularly as a member of Eddie Gomez's groups. Other musicians with whom the pianist has played or recorded with include Herb Ellis, Jim Ferguson, Carl Fontana, Tim Hagans, Marc Johnson, Dick Oatts, Rich Perry, Chris Potter, Rufus Reid, Marvin Smitty Smith, Ed Soph, Marvin Stamm, Harvie S, Jiggs Wigham, and others. In the mid-'90s, Karlsson signed with the Troppe Note/Cambria label, recording several CDs for them, including the critically praised Music Is Forever: The Music of Pianist Russ Freeman