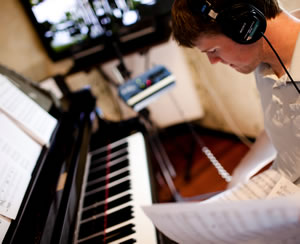 Josh Moshier is a pianist and composer living in Evanston, IL. He has performed in the Chicago area with many great jazz musicians including Doug Stone, James Davis, John Wojciechowski, Jeff Campbell and Clay Jenkins. His music has been performed by the Joel Spencer Quartet, Dick Oatts with the Northwestern Jazz Ensemble, and by members of Chuck Owen & the Jazz Surge at the International Jazz Composers Symposium. Josh leads a band in Chicago called The Moshier-Lebrun Collective with saxophonist Mike Lebrun, and he has recently assembled an 11-piece band called One Louder. Josh is also active writing music for visual media, scoring several projects by filmmakers in the Chicago area.