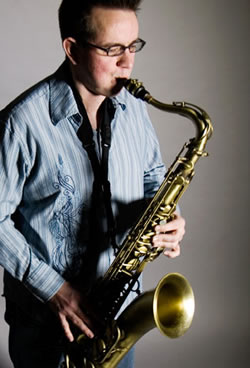 With his hearty sound and bristling ideas, O'Connor can bowl over even a jaded follower of post-bop jazz.
- Neil Tesser, Playboy Guide to Jazz

Saxophonist Mark O'Connor, an Austin, Texas native, has been part of the Chicago and Milwaukee music scenes since 1996 as a performer, composer and educator. His debut CD on Blujazz productions, Mirage, spent eight weeks on the national jazz radio charts and garnered such praise as "With his hearty sound and bristling ideas, O'Connor can bowl over even a jaded follower of post-bop jazz." - Neil Tesser, Author, The Playboy Guide to Jazz, and, "A very good saxophonist he is... melodically and rhythmically engaging lines... expressiveness and melodic sensitivity." - Jazz Times Magazine. O'Connor has performed with such notables as Rufus Reid, Arturo Sandoval, Henry Butler, Steve Turre and Joe Williams. O'Connor's quintet, formed in 2001, has performed at numerous venues throughout the Midwest including The Green Mill, The Elbo Room, The Skokie Theatre, The Chicago Cultural Center and The Rogers Park Jazz Festival in Chicago; The Elephant Room in Austin, TX and The Jazz Estate in Milwaukee.

O'Connor is an alumnus of the world-renowned jazz program at the University of North Texas, where he studied with Dan Haerle and Fred Hamilton. He also attended Eastern Illinois University where he had the priviledge of working with New Orleans piano luminary Henry Butler and Chicago pianist and producer of Mirage, Mark Maegdlin.

After a ten year residency in Chicago, O'Connor decided to further his education yet again, working on a doctorate in jazz performance at the University of Illinois at Urbana-Champaign. While there he worked closely with Maynard Ferguson and Woody Herman alumni Chip McNeill and Chip Stephens.

Currently, O'Connor is working on two major projects - his latest CD, Suspended Reality, which will be released this March on OA2 Records; and his doctoral dissertation regarding tenor saxophonist Joe Farrell.