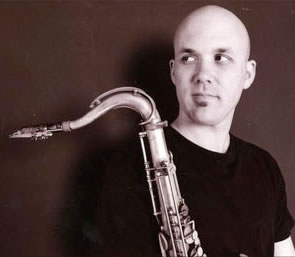 He has an open mind and mature ears
-George Garzone

Originally hailing from Phoenix, Glenn has performed and recorded all over the United States, including Denver, Boston, Alaska, and New York City. Glenn's self-produced CD Downside (1999) garnered critical acclaim from the Arizona Republic, the Rocky Mountain News, the East Valley Tribune, and other newspaper and online reviewers in several cities. Glenn has also performed alongside many notable musicians including Impulse! artist Greg Tardy, Arabesque artist Tony Malaby, ECM Records artist Art Lande, and more (including a performance with the Four Tops, opening for Chuck Berry).

Described as "a brilliant gem," Glenn's modern jazz compositions and highly-skilled, interactive playing have been called "a thoughtful, remarkable style," which is "original and at the same time well-grounded in the jazz tradition." With an educational background including degrees received from Arizona State University and the New England Conservatory of Music, Glenn has studied under such jazz greats as Steve Lacy, George Garzone, Jerry Bergonzi, Michael Cain, and Tony Malaby. While working on his master's degree in Boston, Glenn performed in the Jazz Composers' Orchestra under the direction of Bob Brookmeyer and also with Dave Holland.

As an educator, Glenn has been a guest artist and lecturer at Northern Kentucky University, Valdosta State University, University of Alaska Anchorage, and a variety of high schools across the country. During the 2005-06 school year, Glenn was Visiting Professor of Woodwinds and Jazz Studies at University of Alaska Fairbanks, as well as director of the 2006 UAF Jazz Festival.

Glenn lives in New York City, where he performs regularly with his own group, Sacred Machines, and with other projects. Glenn is a Cannonball Musical Instruments artist.