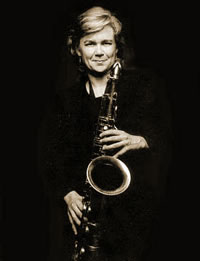 Cynthia is a versatile, accomplished saxophonist and jazz artist. She is now active in the Seattle music scene after many years in New York and San Francisco. Since moving to Seattle in July 2000, Cynthia has performed with the Jazz Police, the Seattle Repertory Jazz Orchestra, Becca Duran and Jay Thomas, the Washington Wind Symphony, Philharmonia NW, the Tacoma Symphony, and many others. She was a recipient of a 2001 Artist Support Grant from Jack Straw Productions where she produced her CD. Cynthia is also the leader/saxophonist of the band New York Confidential, which performs at numerous functions in the Seattle area.

From 1994-1999 she was a member of the all-women big band Diva, based in New York City. With Diva, she performed extensively across the United States, backing such artists as Diane Schuur, Joe Williams, Dave Brubeck and James Brown. Venues played with Diva include the Blue Note, Birdland, and Tavern on the Green in New York, the Kennedy Center in Washington DC, the SS Norway and QE2 Floating Jazz Festivals, and jazz festivals in Berlin, Montreal, Austria and Switzerland. Cynthia can be heard on two of Diva's CDs, Leave It to Diva and I Believe in You.

Cynthia has performed in numerous jazz, classical, pop and experimental ensembles. She led her own jazz quartet in New York and performed at the Knitting Factory Jazz Festival through Music Under New York. While in San Francisco, she was a founding member of the Five-Winged Bird jazz saxophone quintet and was co-founder of the Jazz Women Network. She can also be heard on the self-titled CD of San Francisco jazz violinist Yehudit. Theater work includes the California Shakespeare Festival, the San Francisco Mime Troupe, City College Opera, the Seattle Gilbert and Sullivan Society, and The Big Apple Circus.

Cynthia Mullis earned a Master of Arts in Jazz Performance from Queens College in NYC where she studied with Jimmy Heath and Roland Hanna. In addition she has studied with Roger Greenberg, John McNeil, Bobby Sanabria, Jovino Santos Neto and many others. She holds a Bachelor of Music Performance degree from the University of Northern Colorado. Cynthia is originally from Albuquerque, New Mexico