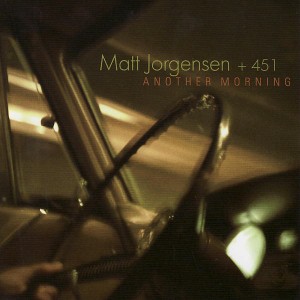 The group is a rhythm section and saxophone, but it sounds like no other. No one playing in this format - with the exception of perhaps Vijay Iyer - has crafted a more distinctive jazz identity.
All About Jazz.com

Drummer Matt Jorgensen and his long-time bandmates continue to push their unique sound in new directions with their fourth studio recording for Origin. With their expansive originals and stirring arrangements of The Beatles' "Helter Skelter," Joe Henderson's "Power To The People," and Neil Young's "Ohio," "Another Morning" provides a broad canvas for the band as they explore the group aesthetic they've been developing over the last decade. Also featured are guest appearances by Thomas Marriott on trumpet and Jason Goessl on guitar. "[Jorgensen's] rock aesthetic lends intensity to his improvisations ..." - The New York Post.

Reviews of Another Morning

All Music Guide (Adam Greenberg)
Despite the greats who spent time developing their craft in Seattle during a previous era (Ray Charles, Quincy Jones), today's Seattle jazz scene is a relatively young one compared to other, more established sounds. As such, perhaps it's fitting that fusion can play a part in it from time to time. Drummer Matt Jorgensen is one of those at the foref ...

The Stranger (Christopher DeLaurenti)
With Another Morning (Origin), Matt Jorgensen+451 continue their pathbreaking combination of jazz, rock, and funk, all without succumbing to the excesses of yore: aimless solos, straitjacketed arrangements, and second-rate riffs. My favorite track, "Lock Down," begins with Ryan Burns laying down some serene electric piano chords but a sequence of a ...

Bopin' Dick's 10 Picks (Dick Crockett)
Another Morning Is your answer to the other side of funk where Jersey City is fading mythology, and space mountain is the new anthology, where Santa Cruz women prefer hair on their legs than a full body wax, where odor is an essence of nirvana. Drummer Jorgensen has assembled a cast of Ryan Burns, keyboards, Mark Taylor saxophones, Phil Sparks, ba ...

JazzTimes, July/August 2008 (Scott Albin)
On the Seattle quartet's first recording since Hope in 2004, Matt jorgensen + 451 continues to explore a particular brand of jazz-rock fusion that is more subtle than your average pounding, thrashing, over-the-top variety. However, leader Jorgensen's fiery and excessively busy drumming often overwhelms and distracts from the group sound as well as ...

Earshot Jazz (Peter Monaghan)
Also on Origin is Matt Jorgensen +451, one of the most impressive live jazz bands in this region, with the potential to impress far afield. Their live performances are at times stunning -- supertight and driving. On disc, as live, the quartet has great confidence. Listening to them, you really do believe that there is every reason why their sound i ...