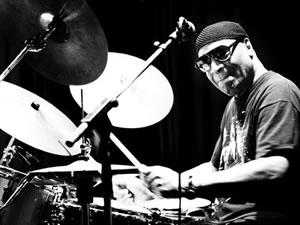 From Jazzwise magazine:
Rashied Ali, the revolutionary drummer most associated with John Coltrane's late period and in particularly the important duo album Interstellar Space, died yesterday aged 74, it has been announced.

Born Robert Patterson in Philadelphia he moved to New York in 1963 and quickly moved to the heart and the heat of the free scene, replacing Elvin Jones when Trane's music moved from the classic quartet to the uncompromising spiritual music that Ali helped usher in along with Trane's wife Alice and others.

He later founded his own club in New York called Ali's Alley and for a while fell from prominence but in recent years again toured extensively on the international scene from the 1990s with his quintet and in duo with Sonny Fortune. He appeared memorably with Prima Materia at the Jazz Cafe in London for a rare show which marked the beginning of a new phase in his career. In issue one of Jazzwise in April 1997 Brian Morton wrote: "Rashied Ali falls into that uneasy category of musicians defined by a single moment in their careers and for whom it is hard to imagine a more secure or appropriate berth. He'd been to Japan with Rollins; he went back with Coltrane. Between most of what were to be the fundamental questions of the new jazz were drafted. If Rollins was Noah, up to his rainbow bridge, then Coltrane was certainly Moses, struggling to deliver his music from its bonds. On this model, Ali is Aaron, the embodiment of liberation within the laws, carrying his twin rods, and getting water out of his stones."

Ali released a duo album with Arthur Rhames more recently on Ayler Records and a quintet album on his own Survival Records last year followed by a Live In Europe album which included music from a gig at the Tampere Jazz Happening in Finland. Ali was at the heart of Coltrane's revolutionary music and through his work at the time and since, his contribution to jazz and the art of improvisation will live on forever.