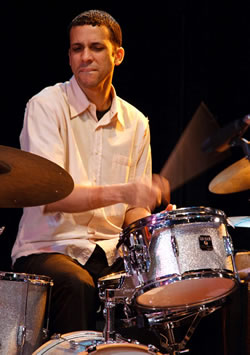 Drummer Adam Cruz pairs flawless technique and a crystalline touch with a level of prophetic intuition that is awe-inspiring.
- Modern Drummer

A creative force on the international jazz scene for the last two decades, drummer and composer Adam Cruz is best known for his work with Danilo Perez, Steve Wilson, David Sanchez and Edward Simon. Cruz was born in New York City. He worked extensively with saxophonist David Sanchez and the Mingus Big Band during the 1990's. He then toured with Chick Corea, recording Origin - A Week at the Blue Note, and spent the end of the 90's touring in a duo setting with guitarist Charlie Hunter.

In recent years Cruz has forged a steady musical relationship with pianist Danilo Perez and is a member of the Danilo Perez Trio, which also features bassist Ben Street. His teachers have included his father - percussionist Ray Cruz, Frank Malabe, Keith Copeland, Kenny Washington and Joe Chambers. He has also worked at various times with artists such as Tom Harrell, Chris Potter, Pharaoh Sanders, John Patitucci, Paquito D'Rivera and many more. Cruz's remarkable musicianship has made him one of the most in demand drummers of today. In 2010 he was awarded a grant from the Aaron Copland Fund for Music to record his debut recording as a composer and bandleader- Milestone, released on Sunnyside Records in April 2011.