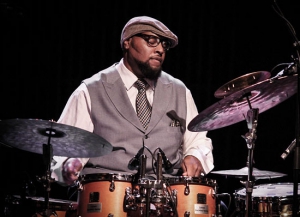 ... this drummer has all the power of an Abrams fighting vehicle, infused with the deadly accuracy of digital technology.
Modern Drummer

A native of East St. Louis, Illinois, Terreon, or "Tank" as his colleagues affectionately call him, began his musical journey performing drum set as a child in church. Pursuing his love for music, Terreon joined the world renowned Lincoln Senior High School Jazz Ensemble under the leadership of Director ROnald Carter. Furthering his education, Terreon attended the University of Houston in Houston, Texas, where his mentor Marvin Sparks, Director of Percussion Studies, introduced him to the wide world of percussion. While attending the university Terreon met his future wife Ramona Houston, Ph.D. In 1996, Terreon graduated with a Bachelor of Arts in Music Performance. Being exposed to various genres and aspects of the music industry throughout his life, Terreon naturally progressed into a career in music. Upon graduation, Terreon moved to Atlanta to explore the possibilities of music in the Southeast. He later moved to New York City in 1998. He lives in both New York City and Atlanta where he continues his musical journey.

Terreon's artistic uniqueness lies in his distinctive sound, authenticity and creativity. A sensitive, colorful and innovative drummer, Terreon mixes different textures and tones on the drums and cymbals to produce breathtaking colors and images. A versatile musician, Terreon approaches each genre in it's authentic context, yet complements it through incorporating various styles in an ingenious manner to create an interesting and innovative sound. His distinctive sound combined with his approach to music complements his expressive creativity.

Terreon performs and records extensively. When not busy with the Christian McBride Band, Stefon Harris, David Sanborn, Marc Cary, Geoffrey Keezer or Yerba Buena, Terreon finds time to squeeze in working with such artists as Burning Spear, Lauryn Hill and Roy Ayers to name a few. Known for his authenticity and versatility, Terreon performs in a variety of genres and musical settings, working with the best. From jazz legends, to modern masters, to the hottest hip hop icons, Terreon has performed, toured, and recorded with many artists, among them: the Benny Green Trio, Charlie Hunter, Real Live Band, Diane Reeves, Abby Lincoln, Russell Gunn, Lizz Wright, Jackie Terrason, and Common as well as a host of other artists. In addition to live performances, Terreon is known for his exceptional work in the studio, recording for albums, films, and commercials.